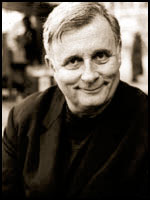 It comes as a surprise that writers screw around. New York Magazine has this take on Erica Jong and Edmund White, writers who recently published memoirs chronicling their sex lives.

http://newyorkmetro.com/arts/books/features/16509/index.html
Someday, I'd like to write such a book. I better start my research.
Posted by the last noel at 7:57 AM 6 comments: 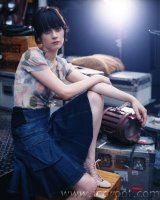 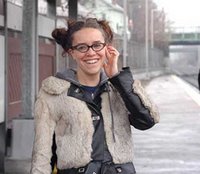 The writer's life has been making great movies: Truman Capote, now Grace Metalious. The truly awesome Michelle Tea (left) dropped by to talk up her new book "Rose of No Man's Land." I asked her if her life was made into a movie, who would play her. She responded, "Zooey Deschanel. She's really wonderful and great to look at."

Michelle, Zooey (right) ain't got half of what you got.
Posted by the last noel at 8:24 AM 3 comments: 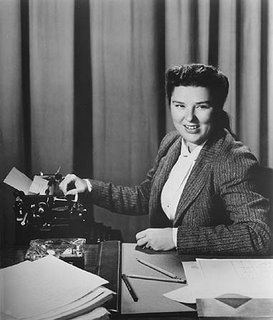 I was inspired to write this post after reading the March Issue of Vanity Fair that profiled writer Grace Metalious and the 50th anniversary of her novel Peyton Place. Several years ago when I was touring New England, I read Peyton Place (about the underbelly of a New England town) on the train. Oh, what a wonderful time in my life that was: I was performing my second solo show "Master of the (miss) Universe," doing reading/signings of "Letters to Montgomery Clift," and my father was still alive.

I became curious about Ms. Metalious and googled her. What a tragic life she'd led--dirt poor, instant fame, then dead of alcoholism at 39. It's the stuff made for a Hollywood movie.

Maybe that's why Sandra Bullock will soon star as the tragic author in an upcoming biopic. 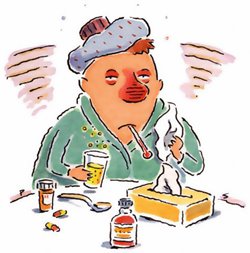 Achoo! By Dose is stuffy, by head hurts. But thoughts keep swirling about on plot points for my next novel. No rest for a writer.
Posted by the last noel at 7:52 PM 6 comments: 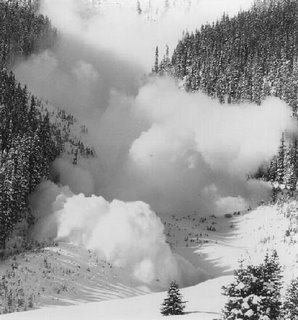 There I was minding my own bizness, just sitting, listening to some strangers talk. Then out of nowhere... an idea for a story popped into my head. Just like that. The story wasn't sparked by anything as far as I can tell. It just appeared. At first, I dimissed it, thinking: I have waaaaay too many unfinished stories in my computer already. I didn't need another one. But the story wouldn't go away. It kept coming and coming. The less I tried to think about it, the more it persisited. It was followed by voices ("Did you see the news?" "Yes, I'm on it."), then images popped into my head (a crowd of people, a sniper), then names floated by (Blake, Gloria), themes inundated me (it's about sacrifice, no, it's about greed). I was overwhelmed, inundated. Finally, I caved in and started outlining the story, hoping to satisfy the rush of demons in my head. At this time, the story is called "Martyrs, Inc."
Posted by the last noel at 2:25 PM 4 comments:

Literary Correction: Not Quite "There" 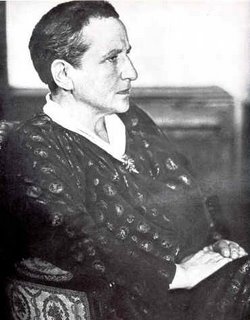 What I love most about my literary life is knowing people who will correct me. Writer Mark Haile read through my blog and saw my post on "Literary Oakland" (11/13/05). I wrote that Gertrude Stein (left) insulted Oakland, stating, "There's no there there."

Mark e-mailed me this...

"About that Gertrude Stein quote: it's famously out of context, (although San Franciscans take great delight in repeating it) as it was actually from a visit she made to her childhood home, where she was dismayed to see that it had been torn down (it's now in downtown Oakland). She had written much from memory about her happy childhood spent there, and was shocked to discover there was not a physical trace of her childhood left."
Posted by the last noel at 8:09 PM 1 comment:

Literary Words To Live By 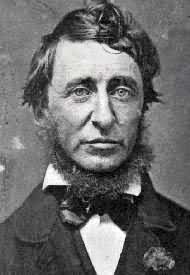 "How vain it is to sit down to write when you have not stood up to live." 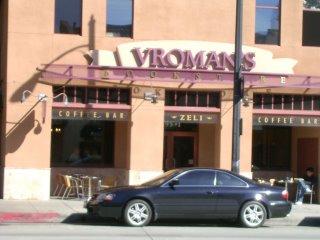 Vromans is one of those bookstores you've GOT to visit. I'll be on a panel with MONA GABLE and CHRISTOPHER MEEKS offering insights and tips on the writing life (like buy a pen). And it's free. C'mon down if you got the time. 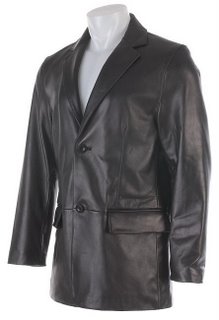 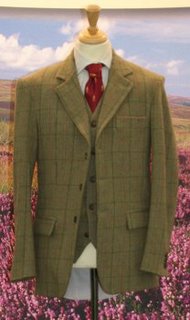 I feel like I've been writing intense things lately. What with all the talk of death and lunar cycles and name calling and such. So, this post is pure fluff.

I've been preoccupied with clothes. More importantly, literary clothes. Maybe this has something to do with the fact I watch Project Runway when I can't write anything worth mentioning. Now, having hosted litarary events at Skylight for five years, I've seen writers wear all sorts of things (biker jacket, Rick Moody; tuxedo shirt over jeans, Dave Kipen; black turtle neck, Bernard Cooper; Polo button down and kacki's, James Ellroy).

Two items that I'm saving up for: a tweed coat and black leather blazer. One says classic writer, the other says sophisticated writer. What do you think makes up a literary look?
Posted by the last noel at 5:31 PM 5 comments: