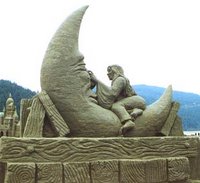 I rewrote the catalogue description. My editor was pleased. Tell me what you think. Here's the new "Moon" copy:

"When Jory Lalaban, a Filipino postman, finds himself the target of a racially motivated shooting he is forced to confront long buried memories of his life in the Philippines - how he came to abandon the priesthood to become a worshipper of the Moon; his youth in an orphanage after World War II; the devastating 'curse' that forced him and his new bride, Belen, to flee the Philippines for the United States.

The shooting makes international headlines disturbing the quiet life of the Lalabans, a family forced to face its darkest fears. The reader is introduced to a cast of memorable characters like Emerson Lalaban, the son who talks to his dead brother on the phone, but fails to properly communicate his feelings to the man he loves; Michael, Emerson's Taiwanese boyfriend, who vows to never fall in love with an American again; the wife Belen Lalaban, a woman who hears the quirky voice of the Virgin Mary; and William, the racist gunman who demands to be heard. Inspired by an actual event, this funny, rich novel unflinchingly tackles the most explosive topics facing America today: race, religion, and sexuality."
Posted by the last noel at 10:13 PM 5 comments: 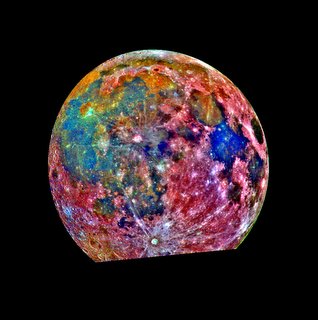 My editor, Don Weise, e-mailed me the blurb that will go into the publisher's catalogue that will help sell my novel "Talking to the Moon." It's too mainstream sounding. He wants me to rewrite it a bit to appeal more to gays and lesbians, part of my core readership. I don't know what I'll come up with, but I have to do it within 24 hours. Above is a picture of the gayest moon I could find. Hopefully, it'll give me inspiration.

This is the original:

"When Jory Lalaban, a Filipino postman, finds himself the target of a racially motivated shooting he is forced to confront long buried memories of his life in the Philippines - how he came to abandon the priesthood to become a worshipper of the Moon; his youth in an orphanage after World War II; the devastating “curse” that forced him and his new bride, Belen, to flee the Philippines for the United States.

The shooting makes international headlines disturbing the quiet life of the Lalabans, a family forced to face its darkest fears. The reader is introduced to a cast of memorable characters like Belen Lalaban, a woman who hears the quirky voice of the Virgin Mary; Emerson Lalaban, the shy son who regularly talks to his dead brother on the phone; Michael, a Taiwanese steward who waits patiently for a guy to say, “I love you”; and William, the racist gunman who demands to be heard. Inspired by an actual event, this funny, rich novel unflinchingly tackles the most explosive topics facing America today: race, religion, and sexuality."
Posted by the last noel at 5:19 PM 5 comments:

Book Expo America happened over the weekend. BEA is a huge annual event that brings together publishers and booksellers. If you're an author, the event is about trying to get exposure for your book. If you're a bookseller, it's about choosing which books you'd like to have in your store.

I've gone twice and it's an exciting, frustrating experience. I found myself talking with a bookseller in Ohio trying to convince him that my book should be on his shelves. I also met some terrific people and partied throughout the weekend.

It can be an expensive weekend with many writers paying their own way, hoping that their books are seen by booksellers. I know this will be me next year. I'm saving those pennies.

People will do all sorts of things to bring attention to a book. (Check out the pic above. No, it's not Disneyland. It's part of the BEA feel.)

More from the New York Times: 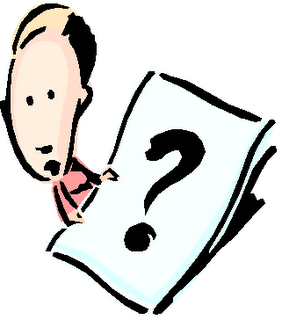 "What Are You Working On?" is an interesting question. It's more interesting when you ask a writer. Mark Prithcard asked many writers what they're working on. (Ur, including me.)

http://www.toobeautiful.org/waywo_top.html
Posted by the last noel at 9:50 PM 3 comments: 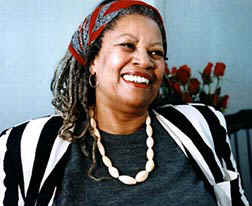 It was interesting to read that the number one choice of Best Work of American Fiction in the Last Twenty-Five Years was Beloved by Toni Morrison (above). Also interesting was that Philip Roth had made the runner-up list with a few of his novels. It's amazing how we come up with this stuff.

http://click.email-publisher.com/maaeNb1abquYra3oRghbaeQxXH/
Posted by the last noel at 6:34 AM 1 comment: 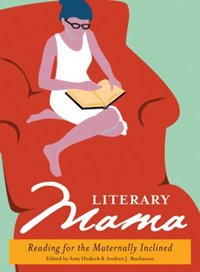 My siblings and I are going to take mom out to lunch to a fancy restaurant in Los Feliz for Mother's Day. Part of this day is to help mom set up her laptop that she bought months ago and is still sitting in a box.

I am truly grateful for mother. She was--and is--a big supporter of my creative life. She'd drive me to auditions back when I was a teenager. She didn't question my choice to go after an arts degree (she pulled double shifts to help me make tuition). She sat through performance after performance of shows I'd done. She bought several copies of my novel, just because. I could go on and on and on.

I'm proud to say I'm a mama's boy. In trolling the web on the subject of literary mothers, I found this cool website called Literary Mama (www.literarymama.com), a literary magazine for the maternally inclined. Check it out.
Posted by the last noel at 6:36 AM 2 comments: 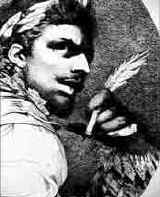 Have you ever gone for long periods of time when nothing happens, then--BOOM!--you're busier than you'd ever been in your life? Well, that's me this Saturday. I'll be on a panel for UCLA's Arts Day in the morning. My panel is at 11am. Later, in the afternoon, on the same campus, I'll be attending the Asian American Writers Congress.

Asian American Writers Congress:
http://apalc.org/bookfestival.htm
Posted by the last noel at 8:07 AM 1 comment: 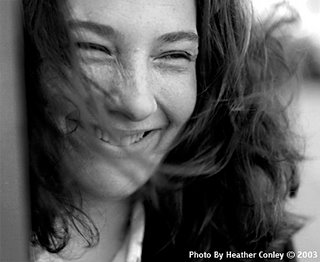 A.M. Homes is a hilarious nutcase. She read from her latest novel "This Book Will Save Your Life." She kept getting distracted by the sounds of the bookstore, like a phone ringing or someone typing on a computer. She'd go on these riffs--"is someone typing a short story while I'm reading?"--voices coming out of nowhere. She's a closet stand up comic, I'm telling you!

I asked her who would play her in the movie of her life. She said, "Lassie."

(Oh, some of you would be happy to know that she's a Mac user.)

Check her out at: www.amhomesbooks.com
Posted by the last noel at 10:16 PM No comments: 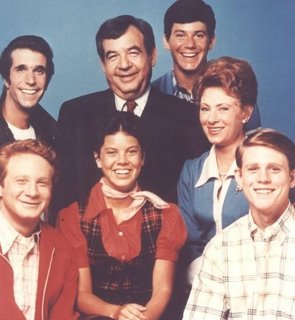 I did it. I made the purchase. I went with a Toshiba. (Thanks, Sally.) I'd been coveting a Toshiba laptop for years--ever since my first writing teacher bought one and gushed over it. Thanks you all for your suggestions. Sorry Apple people, I just couldn't make the switch from PC to Mac.

This may sound weird, but I felt like I'd reached a turning point in my writing life with this computer. I'd been tossing and turning about this purchase for almost year. Now, that I did it, I wondered what all the fuss was about.

Happy Days are here again!
Posted by the last noel at 8:15 AM 4 comments: 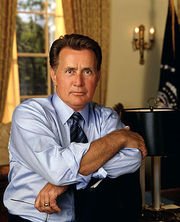 I went to the "Day Without An Immigrant" Rally. What an awesome spectacle. I'd been to several rallies/marches in my life, but this beat it all! It was a record breaking crowd. Along the route, I spoke with actor Martin Sheen (above). He said that he's marching, because his parents were immigrants.

Immigrants and immigration is a recurring theme in my work. As a writer, I couldn't help but notice some of the writing printed on signs:

"Immigrants are not criminals"

"You may hate us, but you need us" 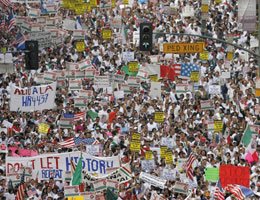 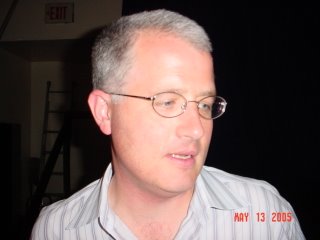 I would have to say that this past weekend was the most literariest weekend I've had this year. It started with dinner on Friday night with my editor, Don Weise (above). He bought me dinner and we talked books. He said I should expect to look over cover art sometime in June. There might a chance that though "Talking to the Moon" is scheduled for a February 2007 publication, it might actually be in stores by Christmas! 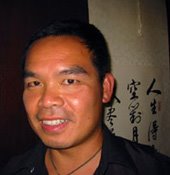 Then we walked over to the Pacific Asia Museum to see my friend Andrew Lam (above) read from his first book, Perfume Dreams. Andrew is a remarkable writer. I had a blast seeing him. It was doubly special because writer Paul Bens was there, too. 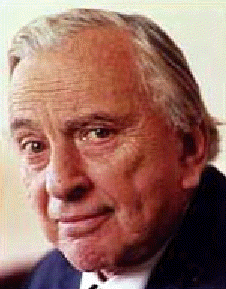 After the reading, Don and I hung out some more and he told me that one of his authors on his fall list is the great Gore Vidal (above). It's apparently Mr. Vidal's last book of fiction, so there's a big buzz going around. If my book was published as planned it would have been on the same list as Gore Vidal's book of short stories. In a way, I'm glad my novel was pushed back to 2007. I'm sure my little book would have been passed over with all the attention Vidal's book would be getting. 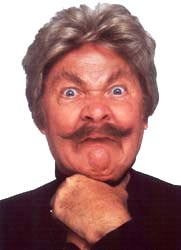 On Saturday, I called Don to let him know what a terrific time I had and to see if he needed anything. Don handed the phone to an author he was lunching with. It was character actor Rip Taylor (above), who'll be doing his memoir with Don. Mr. Taylor says "Mabuhay!" to me and wants to know if I'll be observing the immigrant strike on Monday. He said Beverly Hills is going to shut down without the immigrants doing all the work. I couldn't help but laugh, because Mr. Taylor has this infectiously funny voice. 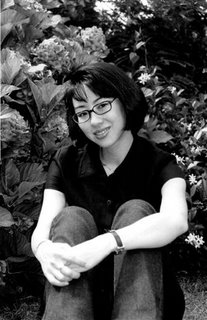 On Saturday afternoon, I finished reading a novel called "Behind the Moon," it's a book from Australia that's making its way to the US. I was asked to blurb it. I thoroughly enjoyed it and I'm sure it'll make a splash for the author Hsu-Ming Teo (above). I think 2007 will be the year of the "Moon" books. With her novel and mine called "Talking to the Moon" on the shelves. 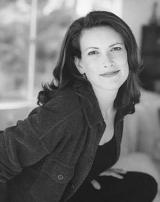 On Sunday, I went to the LA Times Bookfair to see former writing teacher Hope Edelman (above). She's terrific. I went from booth to booth and got some free books on Buddhism. I ran into Andrew Lam, who was a panelist, and he took me to lunch at the Author's lounge. I ran into other writers I knew like Janet Fitch and Diana Wagman. 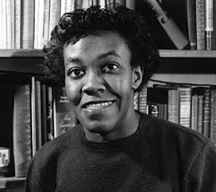 On Sunday evening, I did the Dead Poetry Slam for Smartgals, reading the poetry of the divine Ms. Gwendolym Brooks (above).


Whew! Oh, and somewhere in between I went computer shopping. I didn't buy anything--but I'm close!
Posted by the last noel at 7:10 AM 2 comments: