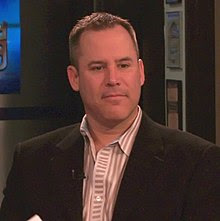 Back in 2007, when my second novel Talking to the Moon came out, I attended a literary event where Vince Flynn spoke.  It was a crime/mystery dinner.  I was invited because "Moon" dealt with a hate crime.

Mr. Flynn was tall and confident.  He was introduced as a New York Times Bestselling author and with the success of his novels, he had easy access to the CIA.  Apparently, his novels about spies are a favorite among spies.

I remember marveling at his success.  He and I were about the same age, and I wondered what it meant to be that successful.  To have several books make it to the New York Times Best Sellers List, must make him a man of means.

Now, I wondered, because he and I are about the same age, how he could have died.  I know it was prostate cancer, but that doesn't diminish the fact that he was still young.  He probably had many more books inside of him.

This is also a reminder that no matter how successful you get, you can't take it with you.  I hope his family and friends find strength to endure this.
Posted by the last noel at 10:26 PM No comments:

Last week, I sent another draft to my agent.  I took some vacation days from work to finish it.  So, the dance continues.  He'll look at it, then get it back to me, more revisions.

There came a point where I wondered: this novel is a piece of crap.  It's come to the point where I've lost any kind sanity when it comes to this book.  All I could do is look at my agent's notes and try my best to follow through.

Many notes are easy to fix--grammar, word-choicing--things like that.  It's the more abstract notes that require the most brain power.  My agent wanted to hear more of my protagonist's internal monologue, his reactions to situations.  That's when it took a little more effort.