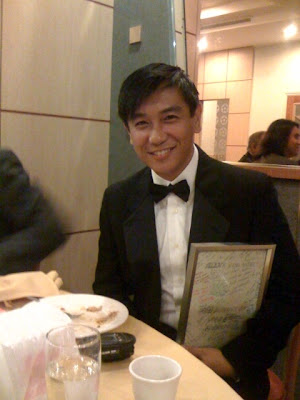 Today was my last day at the Asian Pacific AIDS Intervention Team, an organization that I'd been with for 15 years. A part of me doesn't believe that I'm going. It was a major part of who I am and provided me so much support in my creative endevours.

Earlier this week, my colleagues through me a going away dinner. I wore a tux because I wanted to look my very best for the men and women who meant so much to me.

What's interesting is now that APAIT will become part of my past, it'll provide necessary distance for me to write about that time in my life.

Today, I took one last look at my surroundings, walked through the old rooms, the familiar hallway. I said my good-byes. There was a 21 year old Latino guy who cleans our offices. He speaks some English, but mostly Spanish. I had said hi and bye to him many times. As I left, I couldn't remember the Spanish word for good-bye. A co-worker had to remind me: adios. Ah yes, adios. Then I tried to remember how to say good bye in other languages. I know rudimentary French and Tagalog. My mind went blank. Good-bye can be a difficult word to remember. Hello is so much nicer.

I start a new job on Friday at MAKE ART/STOP AIDS at UCLA. Ola! Bonjour! Mabuhay!
Posted by the last noel at 9:07 PM 11 comments:

I was interviewed for the upcoming Writers Studio at UCLA. Check it out here.
Posted by the last noel at 6:18 PM 1 comment:

You know there was a time when rap music didn't use words like "ho's" in their lyrics. Take this video from old school rappers Run DMC. They were on Reading Rainbow promoting--reading! Not drugs, not gang life. Check out LeVar Burton, post Roots & pre Star Trek, in those fancy 80's duds. 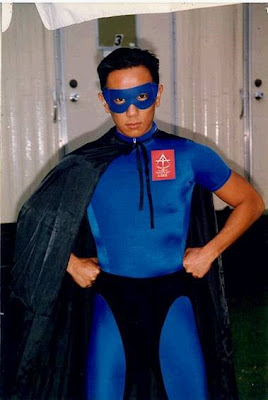 The above picture is of me as Condom Man, circa 1996. My power was to save the world through HIV prevention. I've been with the Asian Pacific AIDS Intervention Team (APAIT) for fifteen years now. It is Southern California's largest provider of HIV/AIDS services to the Asian Pacific communities. I am heartbroken to say that I'll be leaving this fine organization at the end of January.

I started this job when I was twenty-five. I wasn't even writing then. APAIT was made up of writers and other artists when I began. It fostered my creative endeavors. It was at APAIT when my co-worker writer Joel Tan handed me a flyer for a free writing workshop. That flyer began my writing life.

AIDS and art is something I care deeply about. When a position at UCLA's World Arts and Culture Department opened up, working for the Make Art/Stop AIDS (MA/SA) project, it felt right to apply.
MAKE ART/STOP AIDS is an international network of scholars, artists, and activists committed to ending the global AIDS epidemic. With more than 40 million people infected with HIV around the world, and with only approximately 1 million receiving state-of-the-art care, the need for such a network is urgent. MAKE ART/STOP AIDS is founded on the principle that artists are an essential part of anti-AIDS efforts. Artists are master communicators. The arts themselves carry enormous potential as tools of education and information-sharing. Thus, MAKE ART/STOP AIDS seeks to establish artists as key partners in AIDS interventions around the world. You can read more about them here.
I'll be their new Community Organizer. To blend my love for art and all things creative with a cause that is near and dear to me seemed too good to be true. Here's to change!
Posted by the last noel at 5:47 PM 16 comments: 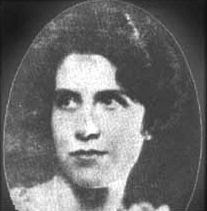 Most people don't know who this woman is.... 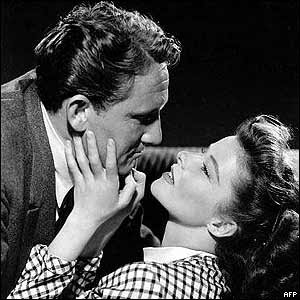 But you may know who this couple is...

The first woman is Louise Treadwell. She was the wife of Spencer Tracy, the man embracing Katherin Hepburn in the photo. It is widely known that Spencer and Katherine had an intimate relationship off screen. How intimate is anyone's guess.

For some reason, I began thinking about Louise Treadwell Tracy. I don't know why. I just wondered about the woman who had to put up with the rumors and gossip that her husband was in a very "close" relationship with one of the most striking and talented women of the 20th century.

Louise was no slouch herself. She did incredible work on behalf of the deaf because her first son was born without hearing. Apparently Spencer Tracy loved his wife dearly. He apparently also loved Katherin. He was Catholic and wouldn't divorce. Upon his death, Katherine Hepburn didn't go to the his funeral out of respect for the family. Is there drama here or what? I'm thinking a play.
Posted by the last noel at 2:06 AM 5 comments: 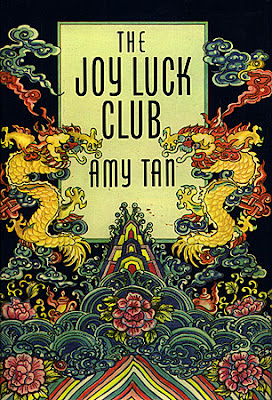 Ever since watching The Color Purple, some old thoughts came up. I was at the LA Times Book Fair years back when Purple author Alice Walker was signing. I waited in line quietly to have her sign my books. Ms. Walker was conversing across the way with a black man behind me. All was going well, then the black man asked Ms. Walker, "When are you going to write something good about the brothers?" Tension wafted in the air. I'd heard about how African American men took issue with the book and the movie, particularly at how they were being negatively portrayed. Alice Walker responded by saying, "That was an ignorant statement." She referred to stories that she'd written extoling black men that he had obviously never read. She made comments about how their community shouldn't bring each other down. "It might be too late," she said. Regardless, there was an uneasy feeling left behind. In the new version of Purple, the men are better drawn, fully conceived--ur, with Quincy Jones as a producer this better be so.

This brings me to the point of this post: The men of color versus the women of color who write about them. I was heavily involved with the Asian Acting community when news about the movie making of Amy Tan's "The Joy Luck Club" was happening. Cool, work for Asian actors! I read the book and loved it! There was, of course, grumblings from Asian men on how we were portrayed in the novel and eventually the movie. We're losers, abusers, and wimps. I am sure that this was not just because of the Joy Luck Club, but from years of dealing with these stereotypes. It hurt more when Asian guys were often passed up for white guys in these stories.

There was one respected actor (don't even dare ask me who he is, I ain't telling) who cursed writers like Amy Tan and Maxine Hong Kingston for writing what they were writing. He pointed out that both women married white men. I could swear he spit when he made that last point.

What I said then is what I say now: we can't tell writers (or artists of any kind) what to write and what to say. If it's offensive, let's use it as a point of discussion and cause for change. In both my novels, Asian men like Bong Bong Luwad, Logan Ito, Jory Lalaban, Emerson Lalaban, and Michael Zhang have problems (as complex characters should), but I tried to make them compelling, interesting, and physically attractive characters. And don't go telling me that my Asian characters aren't real men becuase most of them are gay. Go there and I'll kick your ass.


If people are upset at how Asian men are seen in novels, you are not reading Chang Rae Lee, Ha Jin, Mas Masumoto, Brian Ascolon Roley, to name a few. If you don't like the way Asian men are protrayed in movies, start seeing movies from Asia. I found Wong Kar-Wai films especially moving (In the Mood for Love is a personal fave).

As for Asians dating whites...I don't care. I have more important things to think about like finding ways of illuminating the human condition. There are over six billion people on earth. Well over three billion are Asians. Why are we making such a ruckus over a few million (if that!) who may be marrying non-Asians?

One thing I love about turning 40 is I feel more empowered to say what's on my mind. (For those of you who thought I already had a mouth, you ain't seen nothing yet.)
Posted by the last noel at 3:37 PM 9 comments: 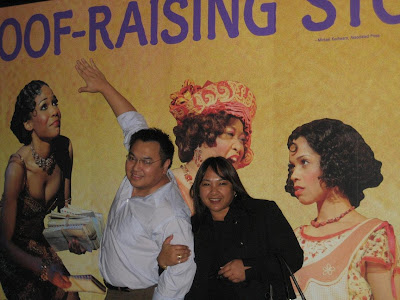 This is my brother John and my sister Joy. 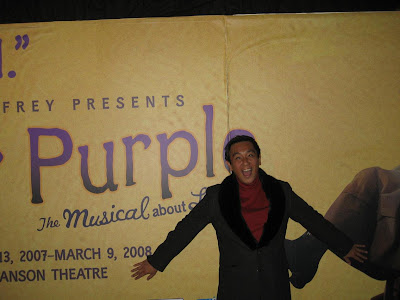 This is me excited to see a musical based on the epistolary novel that helped me put together my semi-epistolary first novel "Letters to Montgomery Clift." Um, I don't know if you can see but that's a black faux fur collar on my coat. I sewed it on myself. 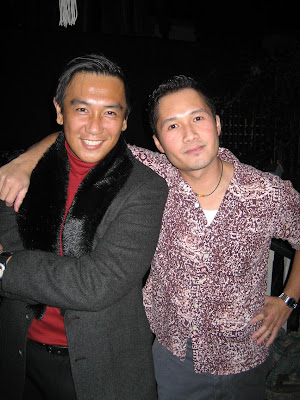 After the musical we went to a New Years Eve party. That's my friend Ericson. He took my author photos, like the one you see on the upper left side of this blog. My coat with the faux fur was a big hit. I got lots of compliments. When people asked me what kind of fur it was. I said, it was cat. That was my joke all evening: It was cat. If you're an animal rights activist and you're reading this, ask a French person what "faux" means. 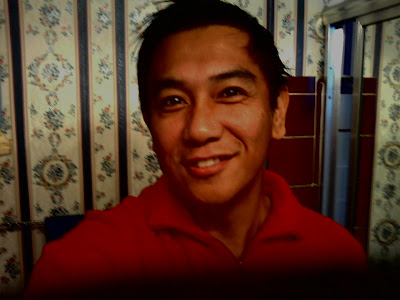 This is me first thing in the morning, waking up being 40. I'll prolly throw a big forty birthday bash later in the year, when people are recovered from the holidays. That's the problem when you're born on January 1st. Every one is exhausted and broke. I'll wait until Spring when everyone is fresh and saved up some money. I can get really good presents then. 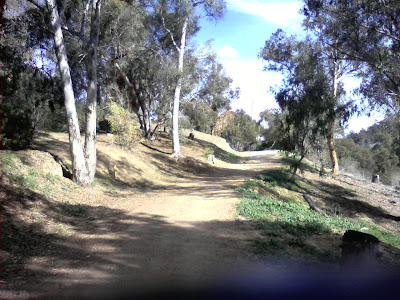 I reflected on being 40. I went on a hike by myself in Elysian park. I first discovered this path when I 14. As I walked, It dawned on me: I'm really doing this creative life stuff for good. I was happy and proud of myself. This same old path looks different every time. 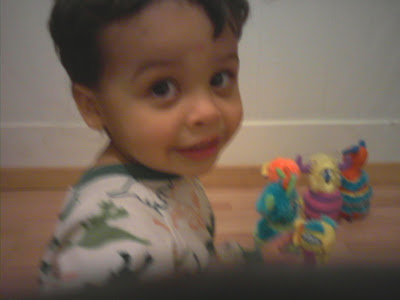 I was also feeling kinda old. Then I went to play with my god son, Cameron. He made me feel young again.
Posted by the last noel at 10:27 PM 9 comments: