There I was writing along, thinking I knew what was going on with my latest novel "Miraculous Boy."  Then an idea pops into my head, a surprise way of dealing with the narrator.  It came out of nowhere.  Most writers would be happy.  My initial response was--NO!!!

You see if I went this direction, I would have to justify it somehow.  This would mean going back and rewriting sections to make it work.  Dang it--I didn't want to do that.

So, I'm wading through it, trying it, tossing it around, seeing if it works.  More later.
Posted by the last noel at 10:32 PM No comments:

Reading Joan Didion: Being Awake in the 1980's 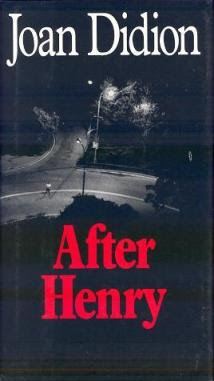 I'd been reading lots of nonfiction, particulary about writers writing about their own lives or providing their own spin on things (pop culture, politics, etc.)  In the past six months, I've read Jeanette Winterson, David Sedaris, Augustin Burroughs, William Styron and Anne Lamotte.  It's great reading about how writers have lead their lives, leading them to the books they write today.

I'm finishing up Joan Didion's After Henry, a book of essays that was published in the early 1990's.  Most of what she writes about is Los Angeles in the 1980's.  I consider the 1980's an important time in my life.  I went through junior high, high school and college in that decade, all of that time in Los Angeles.  Our view of our city at that time is drastically different.

Joan Didion was (is) a mature, astute artist, writing about environment, politics, history.  I was, well, an adolescent growing into young adulthood--my head was in a totally different space.   Reading After Henry, gave me an alternate reality of someone else living in the same city at the same time.  It was truly illuminating, and I loved it.

What is also did was reinforce my own Voice as a writer, because I'm contributing something else.  In these pages, Joan Didion doesn't write about AIDS, that horrible disease that came to light in the 1980's that was an iconic marker in gay history.  Nor does she write about the fall of the Marcos regime, one that influenced the lives of Filipinos all over the world.  Both of these events had influenced me, shaping my world view.

I read that Toni Morrison wanted to write stories that wouldn't have been written if it weren't for her.  Me, too!  It was great reading about Joan Didion's Los Angeles.  Now, I'm going to write about my Los Angeles.  What will you write that no one else is saying?
Posted by the last noel at 9:20 AM 2 comments: