I spoke an Asian American fiction class at Cal-State Northridge. I showed up and was surprised at the very warm welcome. They had a potluck with some incredible food. What I loved about going to this Asian Am. Fiction class was that it was very diverse--there were non-asians taking the class!

There was something personally uplifting about this for me. I read the spectrum: from John Irving to Toni Morrison. Seeing young people making an effort to read about other cultures other than their own was really inspiring. And isn't that the way it should be?

All of the students, probably born in the late 1980's, had never heard of Montgomery Clift or the Marcos dictatorship in the Philippines. In that way, I'm glad my novel had educated them.

Here's a pic of the dignified author (in tan jacket) with a melee of students. Maria, the woman in front of me, teaches the class. They were really great. 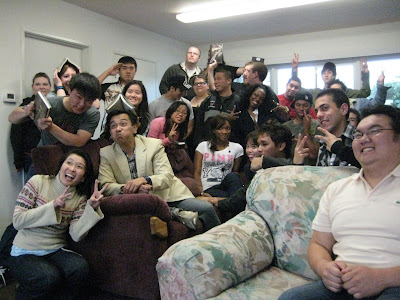 Come one, come all. I am honored to serve as host for another Dead Poetry Slam produced by Smartgals. It's this Sunday night, April 26th. It really is one of those events you must experience. It's a hoot seeing professionals artists interpreting the work of poets no longer with us. Read more here.
Posted by the last noel at 10:10 AM No comments:

It's torture to read and watch news accounts of America torturing people. The physical and mental abuse inflicted upon another person disgusts me. I hear pundits who think that torture is necessary to keep America safe. I've researched torture. When I wrote both my novels I read about how humans inflict harm on others. The reasons vary: to protect our country, to protect what's mine, to defend a belief system. In the end, the people who torture are ALWAYS the bad guys, lacking moral fortitude.

Waterboarding is not torture, says a person for truth, justice, and the American way. I don't know. Simulating drowning sounds like torture to me. Reading about the American doctors and psychologists who helped torture people sound like the same medical personnel in Nazi Germany who experimented on Jews. Those people stained the profession and shouldn't be called doctors.

I thought this from Fox News Shepard Smith said it all:

We don't fxxking torture!
Posted by the last noel at 9:12 PM No comments:

Last night, I spoke to the new group of Emerging Voices fellows at PEN Center USA West. My collegue Jenoyne Addams and I have done Author Nights with them for the past several years. I do this because eleven years ago, I was an Emerging Voice.

The writer's life is hard. It's filled with insecurity and fear. However, I wouldn't trade it for anything. Somewhere in this life is the satisfaction of creativity and the belief that I'm doing something to help the world somehow.
Posted by the last noel at 8:25 AM 1 comment:

After nearly eight months of not looking at my novel, I pulled it out this week. You know, my first reaction WASN'T to vomit. There might be something there.

I'd been toying with making a drastic change to the protagonist's profile. It would layer the character, but it scares me. It would open a whole a new, uncharted door.
Posted by the last noel at 7:41 AM 3 comments: 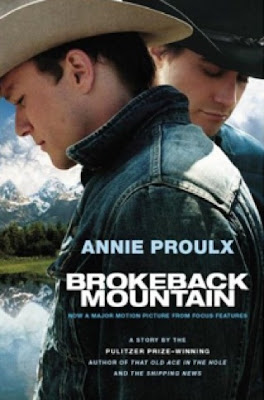 Amazon is calling the deranking of gay books a glitch. Does anyone hear the sound of back pedaling?
Posted by the last noel at 11:23 PM 5 comments:

I live in Silverlake. Something that I'd noticed alot lately are the For Rent signs that have sprung up in the area. I hadn't seen this many For Rent sings in Silverlake since the last economic downturn of the early 1990's. This was waaaaaay before Silverlake became a trendy neighborhood.

I grew up in the area (John Marshall High School, class of 1986--woohoo!). After college, I moved back because it was an AFFORDABLE place to live. It had a true artist's community. It was diverse in every way and as a gay Filipino man I'd never felt more comfortable.

Then the neighborhood changed. The rents got higher and when I looked for another apartment in my neighborhood, I got depressed. I was priced out of a neighborhood that I, as an artist, helped define. How can I forget those snooty documentary filmmakers who moved in along the way. The ones the LA Times did an article on for remodeling a Silverlake home, the home that had the same person living in it for a million years. "Remodeling" was another word for gentrifying.

I was looking in Glendale for a place to live. I had to drive through Silverlake to get there. By chance, I drove by a reasonably priced apartment that just opened up. I snatched it. Trust me when I say, seeing a For Rent sign was odd.

What was even more astounding was seeing a nearby Hollywood apartment being advertised at The Coffee Table, a local cafe. The apartment was less than a thousand dollars. I nearly choked! Is this downturn actually driving the rents down? It might actually be affordable again.
Posted by the last noel at 9:45 PM No comments: