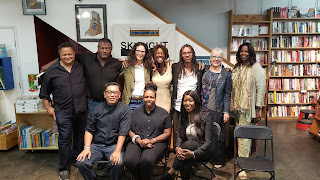 I felt Toni Morrison's passing required some kind of ritual.  On my Facebook feed, I saw people lamenting her death.  The literary community that I circle in was truly mourning.  So, I organized a tribute, asking some awesome writers to participate (photo above, starting with back row: Jervey Tervalon, Gary Philips, Nina Revoyr, Lisa Teasley, Michael Datcher, Terry Wolverton, Lynell George; front row: me, Dana Johnson, Natasha Deon).

At Skylight Books, we discussed the work of Toni Morrison and what she meant to us, then we read passages from her novels.  It was an awesome turnout.  I was thrilled that Walter Mosley (Devil in a Blue Dress) showed up.

At the end of the reading, I did feel a sense of closure. I don't know about anyone else, but I felt this literary ritual was an important one to have.