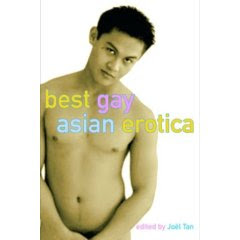 I am in this book called Best Gay Asian Erotica, edited by Joel Tan. I began my writing life writing nothing but Gay Asian life. Embracing who I am was part of my development as an artist and a man. From my recent work, you can see that I began writing about other things as well.

Not too long ago, I began going through old folders in my computer. I ran across a long short story that I started in the mid-nineties. It was really the first story that I'd ever cared about developing. It runs 50 pages long and it's about a gay Asian health worker in the mid-nineties and his unfulfilled love life. (Back then, I was a gay Asian health worker with an unfulfilled love life.)

I sort of abandoned it. Recently, I started picking at it again. It reminds me of a time and place in my life that I'd said farewell to. It was inspired from a bar called Mugi's that is now called The Stone.

I used to hate it here. I mean Ito's is not exactly the Bonaventure Hotel. It's old and dismal, a real dive. Ito's is located in the east end of Hollywood. Far from the Mann's Chinese theatre and the Walk of Fame. Ito's is surrounded with decaying brick buildings. These brick buildings would have probably housed starlets back in the 1930's, but not today.

Ito's bar attracts a very interesting clientele. There's a lot of Korean, Mandarin, Cantonese, Tagalog, Japanese, Thai, and other Asian languages spoken here. Most of the guys here aren't Asian-American like me. Most of these guys are from Asia.

Not too many Asian Americans come to Ito's. Many of us, American born or bread Asians, will party in the bars in Silverlake or West Hollywood. We look at Ito's as that embarrassing place where people who can barely speak English go, where their rough accents are painful to our ears.

I don't know why we divide ourselves: Asian-Asian versus Asian Americans. That's just so.

Lesson # 1: There are certain things that just are, no rhyme or reason. 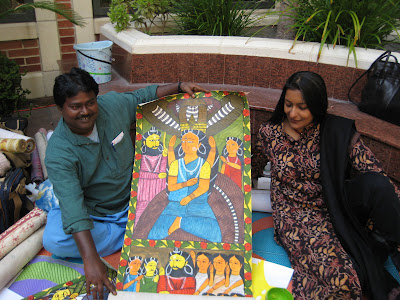 This is Garupuda and his interpreter Nandita. We recenty hosted them when they came from India. There is a tradition in a region of India where Scrolls tell a story. Sort of like a comic book with panels depicting a portion of a story. What makes this even more enchanting is that Garupuda sings the story. He is a respected scroll singer where he's from.

He created scrolls dealing specifically with HIV. The panels tell a sad story in a beautiful way. 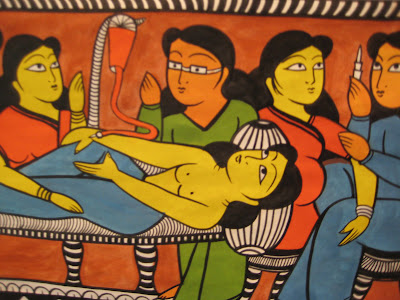 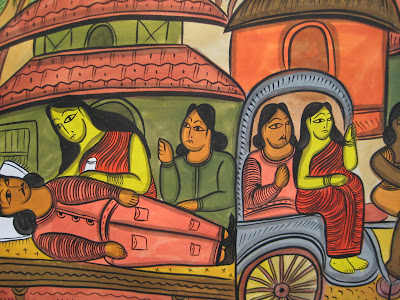 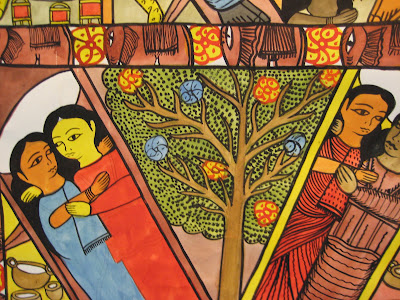 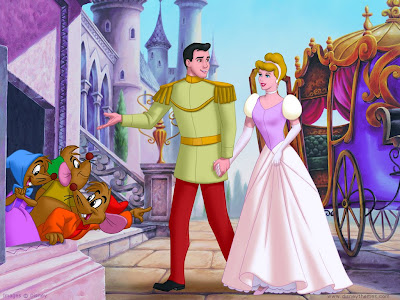 I used to think those story book weddings were ridiculous. I mean that whole Cinderella thing has hi-jacked the lives of many who believe that this magical relationship will come by, ending in a loving marriage. I never thought it was something for me to believe in.
Well, today California okayed gay marriage. You know what? I was thrilled! There was a little bit of the romantic in me and for a moment I thought maybe the Cinderella thing ain't so bad. I actually began to whisper a phrase that might be happen someday: Will you marry me?
Now, I just need to find someone to say it to.
Posted by the last noel at 9:13 PM 7 comments: 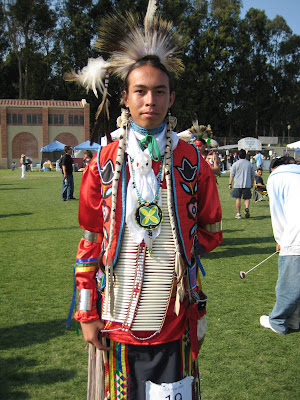 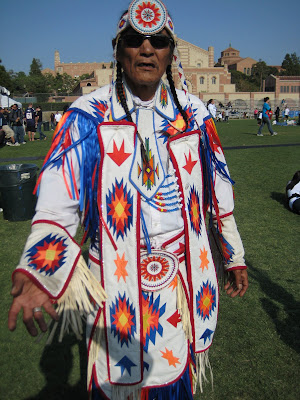 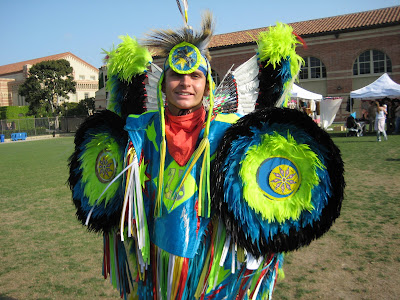 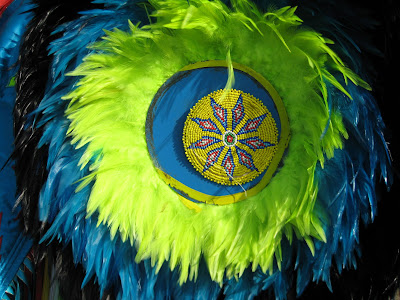 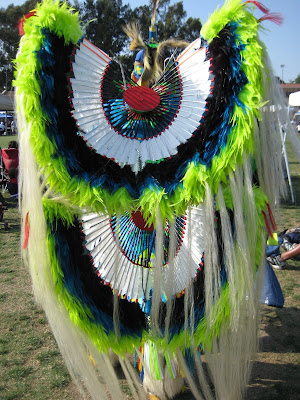 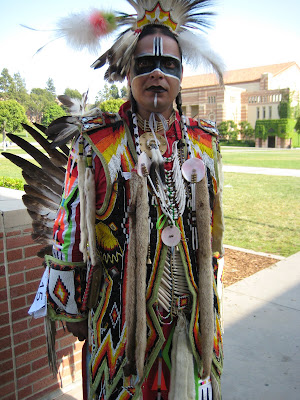 In my last post, I talked about the most amazing reading with Corpus Journal. I didn't mention that Native American Sherman Alexie was one of the writers in the journal. There was an attempt to get him to the reading, but he was unavailable. Interestingly enough, the next day was a Pow Wow on campus. I thought that if we couldn't get Mr. Alexie, atleast the spirit of native cultures were present around the same time.
Posted by the last noel at 10:09 AM 4 comments: 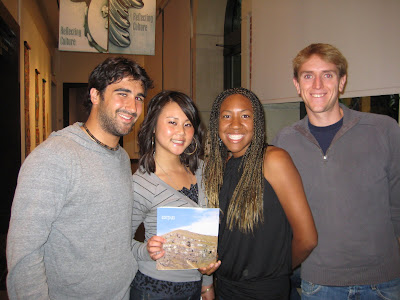 Last week I was a part of an amazing literary event at UCLA. MAKE ARTSTOP AIDS and AIDS Project Los Angeles teamed up to do a reading of Corpus, a literary journal from APLA. Students (above: Coordinator Bobby, with readers Sarah, Turquoise, and Nick) were asked to "respond" to work published in the journal. It was one of those events that made me glad to be a writer. The night was truly magicial. More established writers read their work, then heard how students reacted to it. The room was packed and good vibes went around.

Pato Hebert from APLA did a great job with the journal, a publication that included Sherman Alexie, Elton Naswood, Jaime Cortez, and Keith M. Harris.

On another note, I was asked to write something up for the Center for the Study of Women on campus. I wrote a personal essay on my experience with AIDS and the work of women in the MAKE ARTSTOP AIDS exhibition. The essay also ran on the website for the International Institute. Check it out here.
Posted by the last noel at 4:17 AM 5 comments: 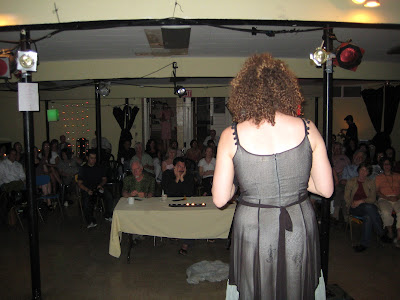 Last week, I hosted the Dead Poet's Slam an annual event produced by Smartgals, an incredible org doing amazing sight specific work. The Slam pits a group of dead poets against another group of dead poets. This year the rivalry was West Coast dead poets vs. East Coast dead poets. Writers, performers, actors intrepret the work and get judged by a panel of experts. One performer interpreted Langston Hughes, while another interpreted Charles Bukowski. And so on. The dead East Coast poets won. Not only is the event fun, but it brings together a great group of talented people. 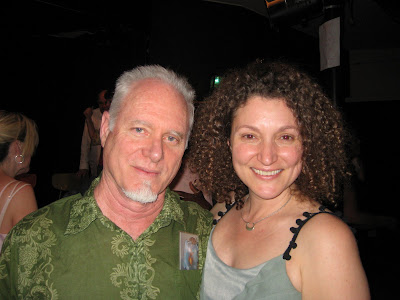 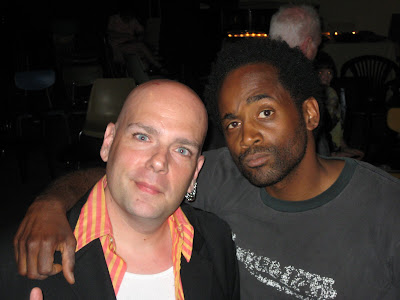 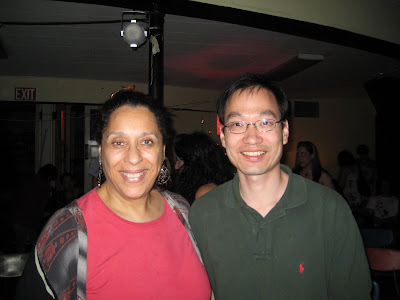 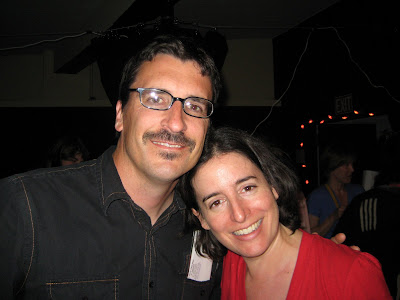 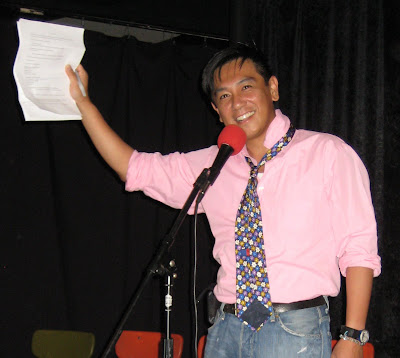 And there I am, host. I was in a goofball mode, dressing in the spirit of the evening's fun. Hence, the updturned collar and funny tie.
Posted by the last noel at 5:01 PM 5 comments:

As we head into the weekend, here are memories of the Times Book Fair from a weekend past. 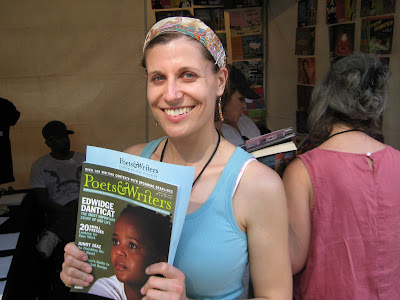 Cheryl Klein poeting and writing in her booth, Poets and Writers. Check out her blog here. 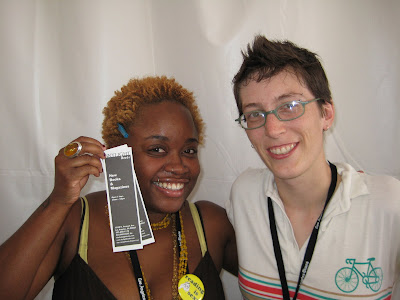 Lavonne and Emily from Skylight Bookstore, my launching pad. You know they're sweltering in that heat. That smile proves their great actresses. 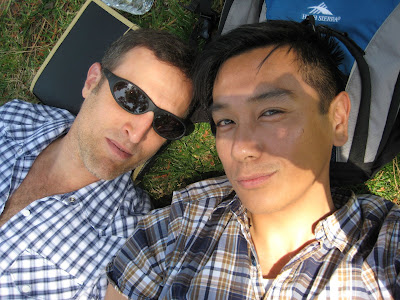 Me and my friend Gali trying to look cool in the cool shade of my camera.
Posted by the last noel at 10:04 PM 4 comments: