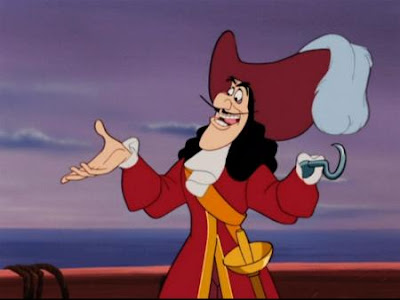 For Halloween, I chose to be a literary villain. I will be Captain Hook from JM Barrie's classic tale "Peter Pan." I began to think about what Hook means to me and why I chose this persona. In Peter Pan, also known as "The Boy Who Wouldn't Grow Up," Captain Hook lost his hand because of Pan. Hook replaced his missing appendage with a hook; thus, his name. An alligator ate the hand and found it delicious, so tasty, in fact, that the alligator followed Hook hoping to eat more of him. Fortunately, for Hook, the alligator also swallowed a clock and Hook knows that the alligator is approaching when he hears ticking.
I'm nearing forty. I wondered if my need to be Hook is my inner most self experiencing aggression toward youth, symbolized by Peter Pan. The tick-tock of the alligator is a constant reminder of my eventual demise. By being Hook this Halloween, I wondered if I'm becoming that crochety old fellow who mutters cliches like, youth is wasted on the young? Is my psyche telling me that I am aging, left battled-scarred, parts of me eaten by time and left with a sharp left hook to show for it?
Or did I choose to be Hook this Halloween because Pirates are really big this season and I got caught up in the hype? Maybe I chose to be Hook so I have an excuse to wear a wig, ruffles and a big hat!
Posted by the last noel at 10:40 AM 4 comments: 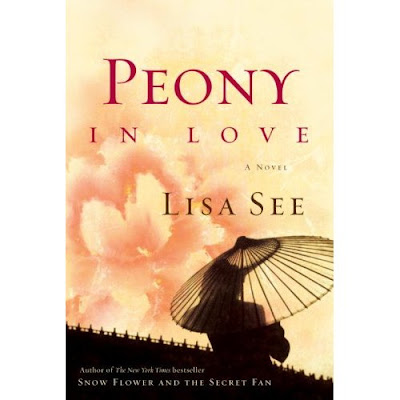 Some time ago, I mentioned that I was up for a literary award with the Southern California Independent Book Association. The nominees included TC Boyle, Salvador Placencia, Lisa See, me, and the legendary Ray Bradbury.

The awards dinner was on Saturday. The award went to...Lisa See for her novel Peony in Love. Congrats!

It was a most enjoyable evening. It was at the Biltmore in downtown. Many authors were gathered for dinner at 6pm., then we were asked to mingle with the booksellers, then table hop while the booksellers had thier dinner.

We were ordered to be nice to the booksellers. We were told one story of an author who yelled at a bookseller from Booksoup in West Hollywood. The store pulled the author's work from their shelves. Alas, I'd heard this story in different forms. I heard of one store pulling a rude author's book and telling customers that her work was no longer in print. Ouch! Always be nice to the bookseller.
Posted by the last noel at 11:00 PM 8 comments: 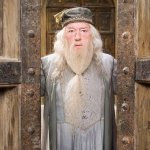 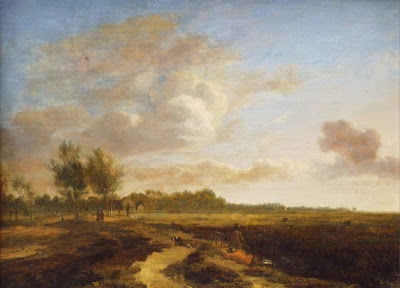 Last night we celebrated our 20th anniversary at work. It was a joyful, sucessful evening. I woke up this morning feeling absolute relief. The writing of my novel had been difficult the last few weeks. My mind mostly focused on the anniversary gala. Squeezing in 20 minutes to work on the novel was hard. This morning, I got up and wrote on the new book for a good hour. I felt a part of my brain had been released, spaciousness grew and I was able to imagine again. 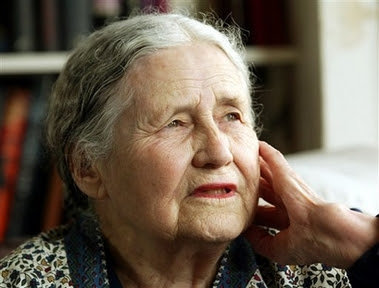 The big literary news of the day is that Doris Lessing won the Nobel Prize in Literature. At 88, she is the oldest person to do so. Congrats, Ms. Lessing!
Posted by the last noel at 8:27 AM 1 comment:

I'm tossing and turning on how to make my third novel work. I'm not freaked out about it. I just know that this is part of the novel writing process. I get frustrated about what happens next, then suddenly in the midst of rush hour traffic it all becomes clear.

I'm also heavily involved in planning the 20th anniversary gala for the nonprofit I've been with for 14 years. Here's a sample of other writing that I'm doing. It's part of the script for the eveing. The following is what our host Amy Hill will say at some point in the evening:

"Before we serve dinner, I want you to know that we have an evening of dance and laughs in store for you. An amazing dance company will be performing for you soon and so will Dat Phan, Winner of Last Comic Standing. Enjoy dinner!"
Not exactly art, I know, but it's keeping the writing muscle very much alive.
Posted by the last noel at 10:33 AM 5 comments:

I spent Sunday at the West Hollywood Book Fair. Always fun. I enjoy running into people I don't run into except for a literary gathering like this one. Some writers that I hadn't seen in awhile include Meghan Daum, Jenoyne Addams, Michael Datcher, Eduardo Santiago, and Frederick Smith.


1. There was a green room for authors. At one point Gore Vidal entered. It was a bit of a shock to see him in a wheel chair. I know he's over 80, but I was still taken aback. I smiled thinking that I'm in the same room as Mr. Vidal.


(Several years ago, I was selling books on behalf of Skylight Bookstore. It was for a Gore Vidal event and I sat next to him while he signed books. I heard a low, gravelly voice say, "Shurley. Shurley, don't forget this." I thought: I KNOW that voice! I looked up and it was Faye Dunaway.)


2. I noticed that on some panels Authors would hog the time talking about their own books, instead of discuss the overall topic presented to the panel. I'd think, Geez, shaddup already!


3. I would have to say the most memorable time was when Actress Eva Marie Saint (below) sat at my table in the Greenroom. I gulped. I couldn't move. She starred in the movie Raintree County, along with my muse Montgomery Clift. I don't get gaga over actors, but when they shared a screen with Monty--whoa! Before I could say something, I was shuttled off to my first panel. Having a brush with one of Monty's leading ladies will have to be enough for me. 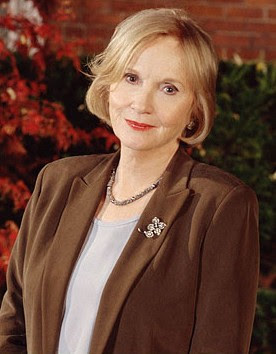