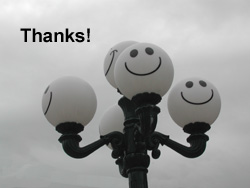 The fun part of this publishing process is sending in my acknowledgment page. From day one, I'd add a name of someone or list a book that had been helpful to me in writing "Moon." I looked it over and realised just how many people I depended on to help me with my novel. Sheesh, there was a lot of kindness out there.
Posted by the last noel at 7:15 AM 1 comment: 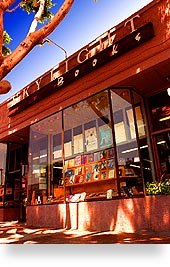 Skylight Bookstore, the place where I'd been hosting events for the past six years, is celebrating its 10th anniversary this weekend. It has become a vital part of literary life in Los Angeles. We'll be having all sorts of food and fun stuff this weekend. C'mon by. 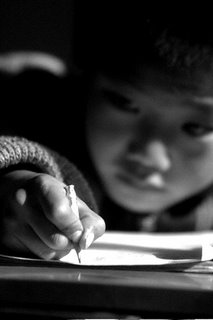 I'd been been so wrapped up with preparing for the publication of my second book that I hadn't had time to write--truly write. Yes, time and effort should go to the birthing process before you start on having another kid, but trying to have another kid is the fun part, right? And I need a little fun these days.


Anyway, I got a glimpse of creative writing again when I was driving to my job in downtown and, out of nowhere, a character from a story that I'd been thinking about entered my head and wouldn't leave.

Before I checked work e-mails and returned phone calls, I had to get those ideas down on paper. It felt good to write again.
Posted by the last noel at 6:25 AM No comments:

I went to the Southern California Booksellers Association Author's Feast Dinner at the Biltmore Hotel (above) on Grand Ave. I wore a tie and blazer and sat among booksellers, authors, booklovers and talked books, books, books. It was also an awards dinner and we applauded those who got notices in fiction, nonfiction, children's books, and mystery. (My first novel was nominated several years ago along with Alice Sebold and TC Boyle. Mr. Boyle won.)

This is the best part of the book biz that I like. People there just seemed to love books and respect writers. I went as both a bookseller (for Skylight books) and as an author. (Of course, I had to mentioned that I have a new book coming out next year and please keep an eye out for it.)

What I like about being around book people is that they are so smart. I never think that I'm talking to a ditz (which is something I always felt when I went to entertainment industry functions). The conversations were filled with substance. I enjoyed talking with religous scholar Jonathon Kirsch about his new book on the end of the world as proclaimed in the bible. I was in awe when Historian Lilian Faderman talked about the contributions of Los Angeles to the gay world. I loved listening to novelist Susan Straight tell me that there's a hot new writer on the scene--Alex Espinoza--who wrote a novel that I've GOT to read.

In the end, I hung out with other independent bookstore folks from Vromans in Pasadena and Booksoup in West Hollywood. We sat around and talked about writing and writers. We shook our heads at the number of magazines who are cutting their book review sections. We talked about starting a reality TV show about writers who work in a bookstore. We laughed and said no one would watch it.

I enjoyed this evening. It was stimulating.
Posted by the last noel at 12:07 AM 3 comments: 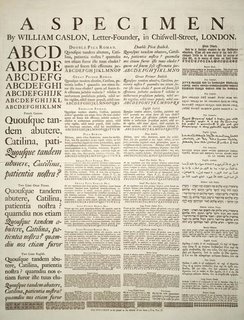 I'd been looking at typeset pages of my novel. It's interesting seeing the type laid out. It does make a difference seeing my name written on the cover page. A swirly--is that a word?--font is used to spell Noel Alumit. It's interesting. It gives my name a ponderous, romantic, old-world feeling. As opposed to the Times New Roman font I always use, hoping to appear direct and modern.

A font makes a big difference. 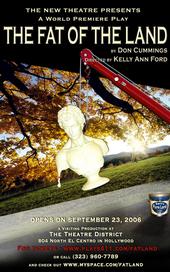 Last night I went to see a friend's play. It's called "The Fat of the Land" by Don Cummings. It's interesting seeing work by a playwright. The words have to be heard and not read. It takes one actor to change the intention of a sentence.

It's always a sticky sitch going to a friend's play. The stars have to be aligned for everything to work. It's not just the writer, it's the actors, designers, and director working together.

One of the reasons I turned away from the stage and toward the novel is because I didn't want to have to collaborate that much. Novelists are control freaks.

I thoroughly enjoyed "Fat." Go see it. It's an honest to goodness play. There wasn't incredible light or sound effects. No extravagant costumes or scene changes. It's about people and their lives and their relationships to each other. It's playing in Hollwyood. Check out Don Cumming's website: www.doncummings.net.
Posted by the last noel at 7:14 AM No comments:

Every once and awhile my compartimentalized life comes together. My literary, theatrical, non-profit, and pop-culture lives melt into one. That happened last Saturday, October 7th, during "Quest," a signature event of the Asian Pacific AIDS Intervention Team that promotes transgedner awareness and advocacy through the guise of a pageant. That's the nonprofit part. I wrote most of the script and invited writer friends (Fred Smith and Clint Catalyst) to judge. That's the literary part. I played "skybox commentator" during the pageant--that's the theatrical part. I invited Jenny Shimizu, arguably the most successful Asian American model to have ever lived, and Nick Verreos from Season Two of Project Runway to also judge. Clint Catalyst is also a writer and Associate Producer of American's Next Top Model (currently on strike). That's the pop-culture part.

This is me and fellow performance artist Kristina Wong. 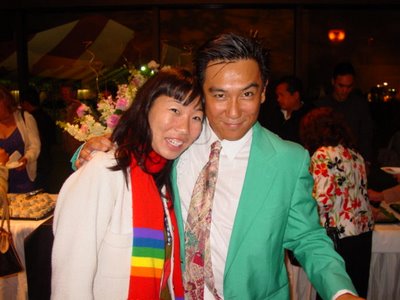 Author Fred Smith's next book "The Right Side of the Wrong Bed" will be out in 2007. He judged this year. He had so much fun he wants to judge next year! 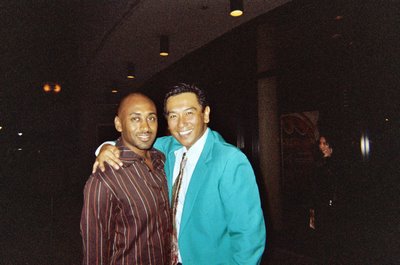 Frontiers Magazine editor Alex Cho (in white) with his friends. Alex also judged and his magazine was our media sponsor. 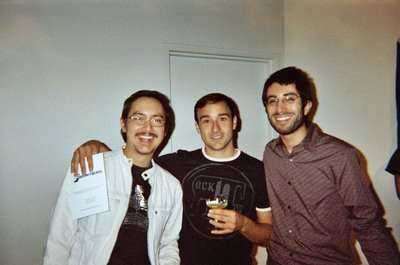 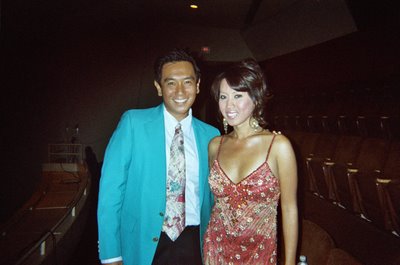 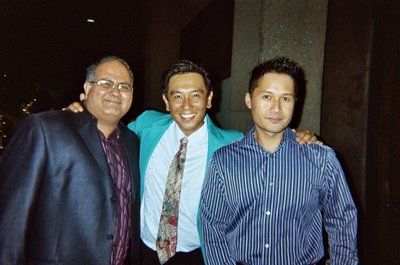 Jenny told me she had a blast. I'm glad. I hate asking people to donate their time and energy and then have a crappy time doing it. 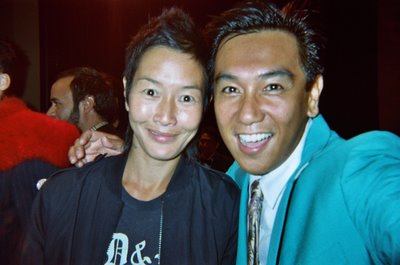 Clint had this outfit made especially for the evening. The red fur is detachable. 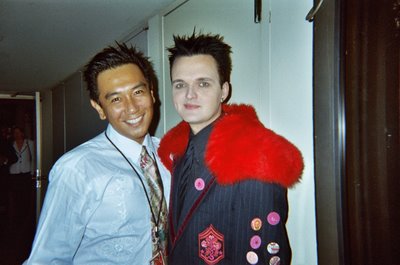 Nick Verreos is just the sweetest guy. I was thrilled that he agreed to judge the event. 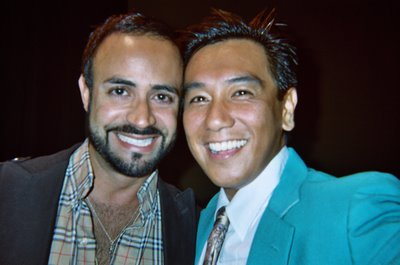 In the end, a rush to congratulate the winner Maria Roman (in orage with a crown on her head). The final question--which I wrote--was: if you had one minute with President Bush, what would you say to advocate for your community. She said, she would ask him not to cut AIDS funding, because we desperately need the funds. I knew she nailed it. 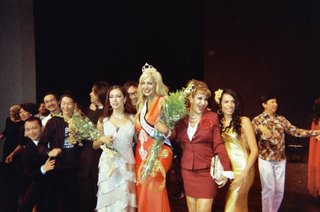 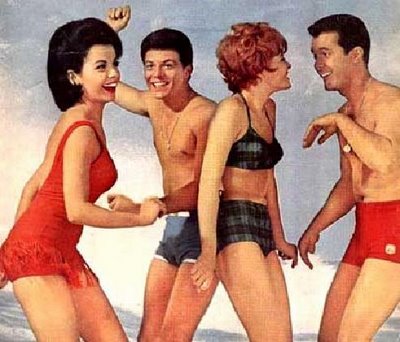