If you're around on this Memorial Day Weekend, please join staff at Skylight Books as we read from our work! It'll be this Saturday. More here.
Posted by the last noel at 8:50 AM No comments:

Art-Saving in our thrift stores

Last year I was in Goodwill buying a shirt. A painting caught my eye. It was an abstract painting in varying hues of orange, sunset colors really. After staring at it for awhile, I saw that it was really a painting of a butterfly. I smiled because the art transformed right before my eyes, as long as I was willing to see it in a different way. Of course, the concept of transformation, change is often represented in a butterfly and, perhaps, that's why the artist chose it as a motif. I was moved by the painting because it depicted chyrsalis and the burnt orange made me sigh.

The painting was $50, which was something that wasn't in my budget. I was there for a $5 shirt, not a painting. My pragmatic side kicked in and I decided to think about it. When I returned to Goodwill, I discovered that the staff had placed several pictures on top of the painting. The corners of the pictures dented the canvas, ruining it. Management took notice and repriced the piece at $9.99.

I didn't buy it. I left angry. I felt like a beautiful person had been defaced and I was mad at myself for not buying it when I had the chance. In the last year, I'd "saved" several pieces of art from thriftstores. Below are some of them. 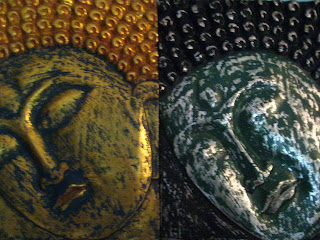 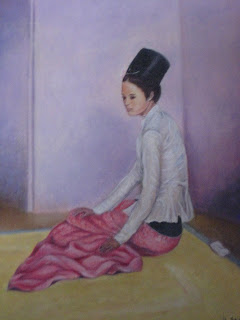 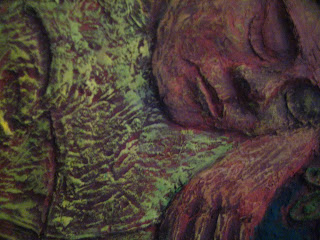 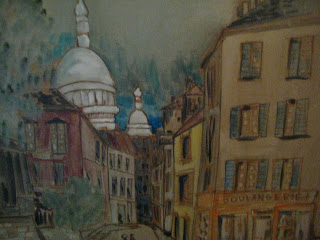 This piece I'm particularly proud of saving. It's by Linda Smith. Her website here. Her work sits in Madonna's private collection. Ironically, I e-mailed her about this piece and we have mutual friends. I plan to attend a group show that she's a part of in June. 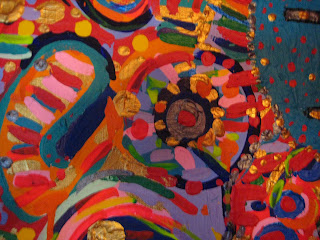 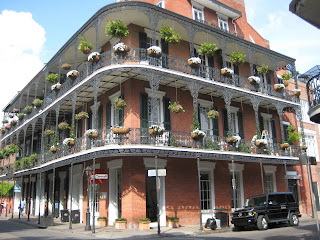 I just returned from New Orleans. I'd never been to this city and I'm certainly going back! After New Orleans, I believe I'd seen the trifecta of Eurpean colonies in America. New England has its British roots, Southern California has its Spanish roots. Well, New Orleans gave me the point of view of our French Colonizers. Mon Dieu! I learned alot. There's a lot of history in New Orleans: the first colonists were the unwanted of France--thieves, murderers and whores. The French seemd to be the most civil with their slaves--if you want to call owning slaves civil--but the Noire Code, forbid the beating and killing of slaves. In addition, Slaves were allowed to have second jobs in order to buy their own freedom, leading up to Louisiana having the largest number of wealthiest blacks in the South. African Americans were allowed to assemble, which led to the birth of jazz. 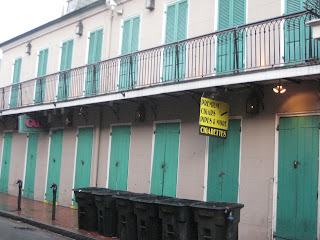 Of course we know New Orleans had seen some tough times. Katrina had devasted the city, something the city hadn't quite recovered from. The oil spill in the Gulf threatens wildlife and fishing in the area. This is why anyone reading this blog should flock to New Orleans and support its residents. They desperatly need the commerce.

What I loved about the New Orleans is that it so supports its artists. Buying local art is tax free. There is an array of literary festivals worth attending: the Tennessee Williams Festival, the William Faulkner fest, and Saints and Sinners, the LGBT lit fest. 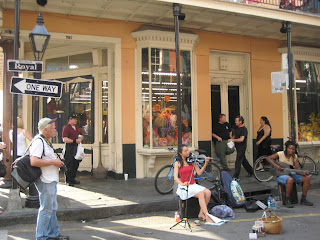 I was there for the Saints and Sinners conference, a place to talk about writing and develop our skills. I went to accept the James Duggins Award for mid-career artists. This is me with fellow winner Lee Lynch. I dressed as a jass musician to honor the city. 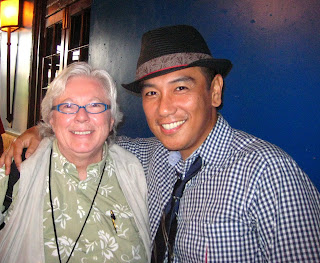 On Sunday morning, the day before I was supposed to leave, it rained. It was quite lovely. 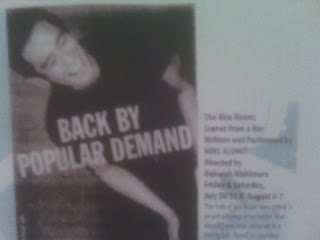 I went to the Highways 21st Anniversary Party and had a blast. In the lobby, they had programs from the last 21 years, including the above pic (taken with my blackberry). This was back in 1999. Trust me, I went all nostalgic looking at the past photos. I also remembered the anxiety and joy of putting on a show where I wrote and performed it all.

Back then, the only way I knew how to speak, make a statement about the world, was on the stage. Now, I do it through books or essays or short stories. I'm somewhat satisfied with being heard this way. I always said that I'd go back to the stage when I have something to say that need theatrical conventions. I have some ideas brewing but nothing concrete. My last show at Highways was in 2002, so I'm worried that I hadn't developed a how in nearly ten years!

I'd been wondering about other ways to get my point across. I'm thinking about visual art or conceptual art. Hmmmm. Maybe I can do a show incorporating that. 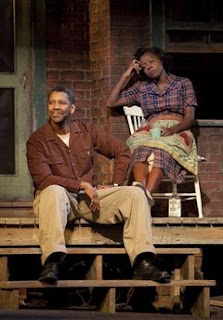 The Tony nominations are out, and it looks like Hollywood has invaded Broadway. In the 1990's, I was in New York seeing plays. I didn't recognize names of most of the actors. There was something cool about that. With theatres struggling to stay alive, it seems casting movie or tv stars is a way of insuring an audience.

It just means that well-studied actors dedicated to their craft might lose a role to someone who was on a season of Survivor.

Click here.
Posted by the last noel at 7:05 AM No comments:

Run to the Nick Cave Exhibition 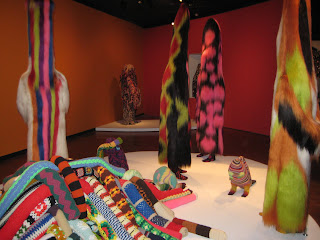 If you haven't been to the Nick Cave Exhibit at the Fowler Museum at UCLA, you'll kick yourself. It was STUNNING! More here.

I was simply floored with what he was doing with fabric and beads and faux fur and sequence. It really is something to experience. It ends May 20. Go!
Posted by the last noel at 10:52 PM 1 comment: