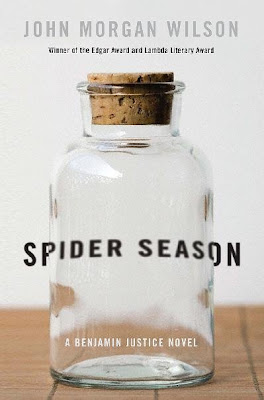 Pick up the latest installation of the Benjamin Justice Mystery series by John Morgan Wilson. In this novel, Benjamin Justice writes a memoir about his turbulent life. He talks about experiencing the Los Angeles literary life, particularly in this passage about doing a reading at Skylight Bookstore.

"Judith Zeitler met me in front of the bookstore, took me inside, and introduced me to Noel Alumit, a young novelist with handsome, bronze Filipino looks, who was also Skylight's events planner. I looked around but didn'tsee Ismael. Alumit and I chatted a bit and I purchased a copy of his latest novel, Talking to the Moon. Zeitler had suggested I buy a book wherever I was invited to read to show my support for the bookseller, but Alumit's bedroom eyes probably had something to do with it too."

Yes, folks, I've been paid the ultimate compliment--I was made into a character in a novel. And I blush every time I read it. I am truly honored and flattered. Whoa!

You know, this is fiction when my tired ass is described as "handsome" and my falling lids are described as "bedroom eyes." Oy!
Posted by the last noel at 3:52 AM 5 comments:


Joe Bilog who blogs here asked me this question: How did you feel about Elizabeth Alexander's poem and delivery of after Obama's speech?

First of all, I'm glad we're having this discussion about poetry. We certainly didn't have this when Bushy was around.

Since the question was raised, I'll discuss my opinion on Obama's choice of Ms. Alexander. I was wondering why he didn't choose Poet Laureate Kay Ryan. I mean, isn't that her job as Poet Laureate? To write for occasions like an inauguration? Besides, I thought it would have been a significant gesture for Ryan, a lesbian, to be on the same stage as homophobe Pastor Rick Warren. It would have added to Obama's inclusivity theme.

I didn't harp on Obama's choice of Alexander, assuming she would be amazing. She was...in a distant, academic sort of way. I believe most were perplexed by her work. This is unfortunate. One of the reasons poetry gets slammed is because most don't get it. (Go to Youtube and check out the comments) Personally, I wished she'd written something more accessible. I've always believed that one should think of her audience when penning anything.

Obama should have given the lesbian a chance.
Posted by the last noel at 10:18 PM 2 comments: 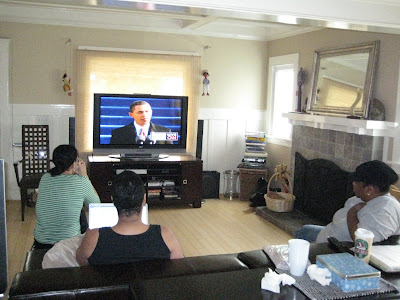 This morning, I went to experience this historic moment at my best friend Adele's house. I used to have deep conversations with her (when we were 13) about seeing a black person or a woman becoming president. I remember telling her that it would happen in our lifetime. Who else would I spend this moment with? (If anything, to tell her that I was right!)

Obama's speech was simply amazing. He is a writer! His word-choicing, his rhyme was incredible.
I was truly moved. Hell, even the sight of Rick Warren didn't induce me to vomit. I felt like I was a part of history. And when Bush boarded that chopper, flying away from the White House, I was thrilled. 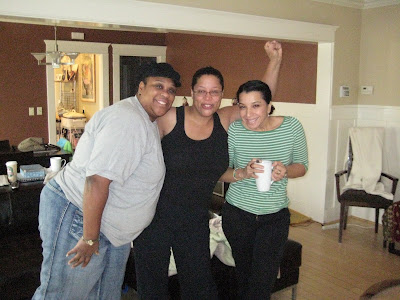 This is the set of bad seeds I spent the morning with (left to right: Tracey, Adele, Jessica). They cried, I cried when Obama was sworn in. 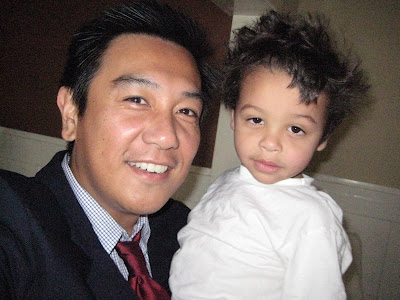 And this ragtag kid is my god child, Cameron. He didn't care too much about the inauguration. He was too busy counting the frogs on his pajamas. In some ways, I'm glad he'll never know how historic this time was. When he reaches his forties, I hope the election of a person of color or a woman will be no big deal because it'll happen all the time.
Posted by the last noel at 9:19 PM 1 comment:

Sally who blogs here, tagged me. She asked: what 10 things you did in 2008 that you're happy about or proud of.

1. I started work with the UCLA Art Global Health Center.
2. I dated a nice guy named Chris.
3. I went to Mexico for the Internal AIDS conference.
4. I wrote on a pyramid.
5. I hadn't had a drink or drug in 15 years.
6. I visited Frida Kahlo's house.
7. I promoted art.
8. I dated a remarkable man named Joe.
9. I experienced true grace.
10. I met some really great people, like David, Cathryn, Bobby, Turquoise, Margaux
Posted by the last noel at 10:16 PM 6 comments: 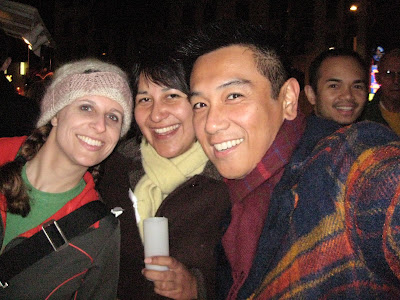 If you haven't noticed, my last coupla posts were kinda cynical. As part of my New Year's resolve, I pledge more creativity to counter the cynics of the world (including me). I'm going to be the most creative I'd ever been. More art, I say.

I went to a candlelight vigil late in 2008. It was to quietly protest Prop 8. I went with friends and ran into literary lady Cheryl Klein (left) with her parter CC, behind me is friend Jaf. Solidarity is one of the best ways of removing negatvity in the world. What I enjoyed most about that evening was the alternative to the loudness of the protests. Loudness is great--a whisper can also be effective. 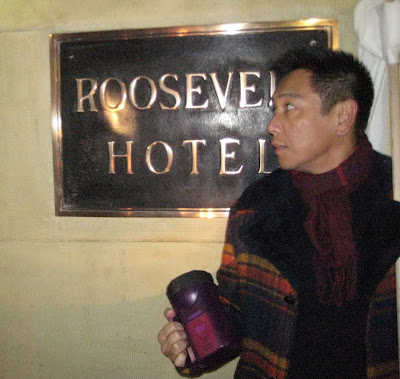 This is the hotel where the spirit of Montgomery Clift is said to roam. We walked past it several time during the candlelight vigil. Despite all the griping I've made about rights for the gay community, I recognize the fact that I am more blessed than other gay men who came before me--like M. Clift.
I work so that gay people after me will be even more blessed than I. Here's to more art in 2009!
Posted by the last noel at 12:19 PM 8 comments: