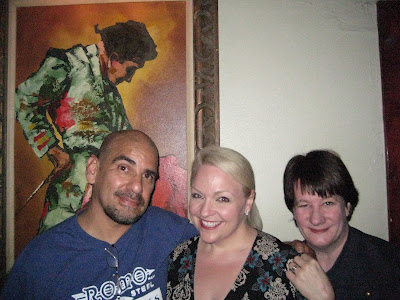 I was fortunate enough to partake in the Tongue and Groove reading series put put on by Conrad Romo (above with fellow writers Faye Lane and Catherine Griffith). I shared the stage with some great talent, including Kate Crash, Kerrie Kvashay-Boyle, and Jake Labotz.
In preparing for this, I had an interesting time. I couldn't decide what to read. I was sort of tired of reading from the novels. I didn't feel like reading from the new novel-in-progress. I considered some short stories, maybe an essay. In the end, I chose a monologue from one of my solo shows and borrowed an entry from My Finger Project, a piece written by Cheryl Klein.
As I prepared, I remembered how I didn't have much of a choice 10 years ago. I didn't have that much to choose from. To think that now I have a "Body of Work" to pull from was actually kinda cool.
I read/performed a piece from The Rice Room. I hadn't done anything from that war horse in awhile. Performing Rice Room was interesting. I was acting! Inside it felt like home. I couldn't sleep because the feeling was so familiar and exciting.
Funny, when I was a twenty year old actor, I didn't know I'd become a performance artist. When I was thirty, I only had dreams of publishing a novel. Now, that I'm forty, I wonder what I'm going to become.
Posted by the last noel at 9:43 PM 4 comments:

I. I've noted that my next novel will have Blood and Disease as themes. Earlier this month, I got into a heated e-mail exchange about how gay men can't give blood becuase of the fear of tainting the blood supply with AIDS. However, heterosexuals who make up most of the HIV infections in the world aren't held to the same standards. Also, it turns out drug users and prostitutes can eventually give blood after a certain time, but gay men can't. Ever! Some of you who read my second novel Talking to the Moon may have remembered a scene where a son couldn't give his dying father blood because he was gay. Well, that came from my real life experience.

Writer (and former student) Serena Lin wrote (with minor assistance from me) this piece for Asian Week. It says in a nutshell that this practice is wrong and should be changed.

II. I escaped the heat of Los Angeles by doing a reading in San Francisco with Michelle Tea (below) on Tuesday. It was most fun. For the first time, I read a section from my novel-in-progress, Boy With Bleeding Hands (see section I about what it's about). It was a wonderful exercise in putting my next novel out into the world. 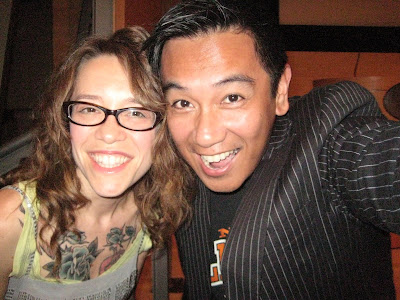 III. It's going to get hot this weekend as I do a reading for Conrad Romo's Tongue and the Groove. I'll probably be reading from the new novel as well.
Details:
"Tongue & Groove"A monthly offering of short fiction, personal essays, poetry, spoken word + music produced by Conrad Romo. This month featuring the following: Noel Alumit, Kerrie Kvashay-Boyle, Kate Crash, Katherine Griffith, Faye Lane and music by Jake La Botz.
Sunday the 29th of June
6:00-7:30 pm
The Hotel Cafe1623 1/2 N. Cahuenga Blvd.Hollywood, Ca 90028
$6.00
Posted by the last noel at 9:14 PM 6 comments:

I'd been doing a lot of really queer stuff lately. Maybe because it's June and it simply screams Gay pride month. I started with an event on gay and lesbian publishing, hosted by PEN USA West. 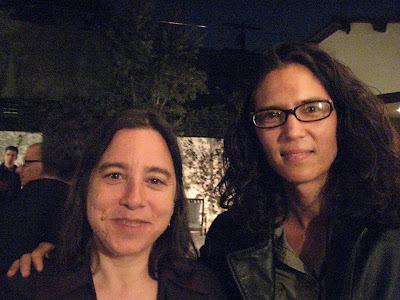 Novelist Sarah Schulman (left), joined here with novelist Nina Revoyr, cracked open the evening by stating the disparities in publishing. Last year, not a single lesbian novel was published by a major publisher. 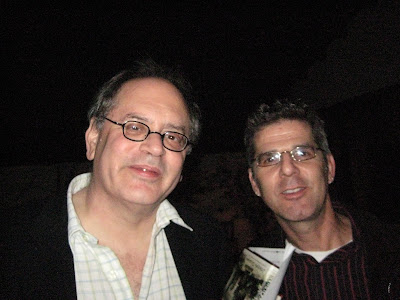 The host was KCRW's Michael Silverblatt (left), joined with Corey Roskin from the City of West Hollywood, who was most passionate about gays and lesbians TAKING a place in the world of writing--cuz no one is going to give it to us. 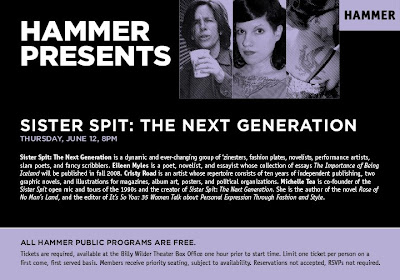 I hung out with the mostly lesbian crowd at the Hammer Museum to check out Sister Spit, a troupe that writer Michelle Tea started in the 1990's in San Francisco that provided space for girls to read their work and develop as writers. Poet Eileen Miles headlined the event.

The Lambda Literary Organization moved to Los Angeles and Executive Director Charles Flowers and Poet/Editor David Groff decided to have a lunch. Some noteworthy writers showed up like Peter Gadol, Chris Rice, and Mark Thomspson. The joint we lunched in was known for it's pizzas, but most of us chose salads to gorge on. 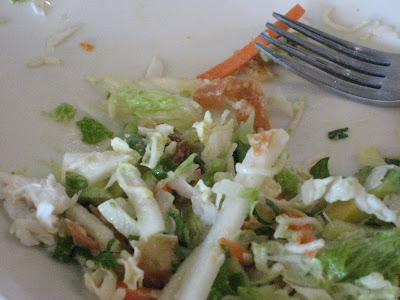 Here is the seafood salad I ate. 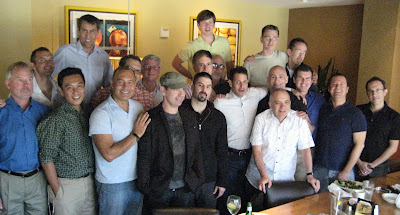 Here's to the gay writers who lunch! 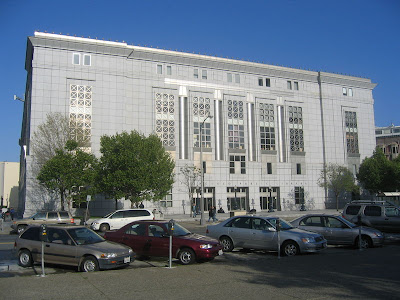 The queer month ends with me doing a reading, curated by Michelle Tea herself, at the San Francisco Public Library (above, located at 100 Larkin and Grove) on June 24th at 6pm. I will be joining zinestor and illustrator Nicole J. Georges (Invincible Summer); performance artist and Sister Spit member Sara Seinberg; and writer, activist, performer and educator Guillermo Gomez-Pena (author of American Book Award winning New World Border). Come on out and say, Hi
Posted by the last noel at 9:07 PM 3 comments: 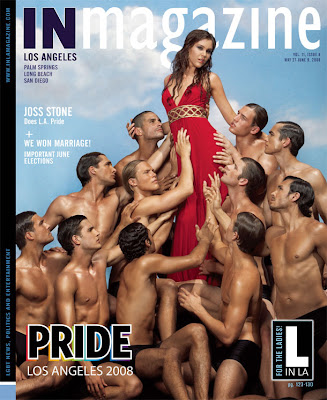 For the Pride issue of IN Los Angeles magazine, I was asked to put together a summer reading guide. Look at who I talked to and find out what ten books I chose that every gay man should read this hot season. See here.
Posted by the last noel at 8:21 PM 2 comments:

I know I'm a creative person. I must create or die. My writing is, ur, um, so-so. I started this internet arts endeavor as a way to stay creative while my writing slogs along.

Many of you know that I'd been doing AIDS work for a veeeeeery long time. It has affected my life, spurred me to write, forced me to grow. I started doing AIDS work at the Chris Brownlee Hospice for People With AIDS, located in Elysian Park. It was back in the early 1990's. Many passed away. One death, in particular, hit me particularly hard and I left abruptly. The hospice closed down in 1996 when life-saving medication came onto the scene.

Today, I went to the rededication of the new Chris Brownlee building. It was in the same place, but the use of the building is different. It's now used for AIDS education purposes.

I thought I'd break down when I walked through the familiar walls, remembering all those who died there. I cried a little, then felt a renewal hope. This building found a new purpose, a new reason for being. Oddly, I felt a closure happening. Things came round.

I wasn't writing then. I didn't know I'd become a writer. Strange: if it weren't for the hospice, I don't think I'd be writing. Alot of people died unceremoniously. Their lives uncelebrated. I think about them sometimes when I write.
Posted by the last noel at 4:18 PM 5 comments:

I went to Book Expo America. It's a huge event with publishers from all over coming to pitch their latest line of books to booksellers. I went to network and check out trends. I also went to a number of networking events (um, parties really) to meet new people. 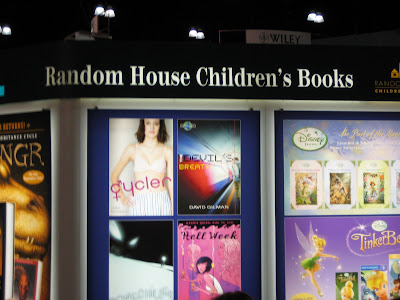 There were, of course, big wigs there taking up huge amounts of space. Every publisher you can imagine was there. 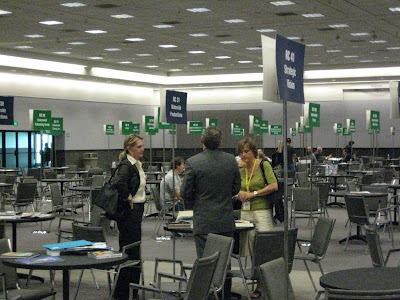 Deals were being made. This hall had agents, editors, and publisher making deals about rights and acquisitions. 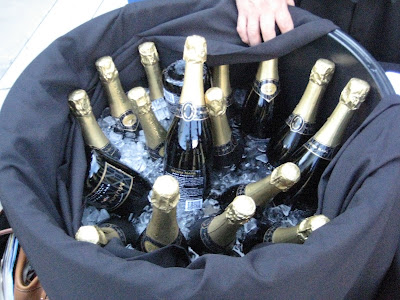 At some events, the champange was flowing. I only had water. 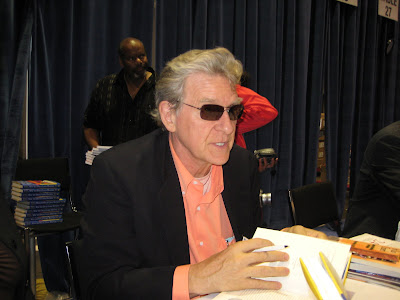 There were important scholarly types talking about their books, like Robert Thurman who endowed the first Chair at Columbia University for the study of Buddhism. He's a brilliant man. Alas, some just call him Uma's dad. 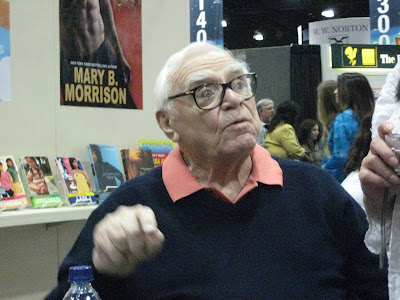 There were celebrities like Ernest Borgnine pushing his memoir. 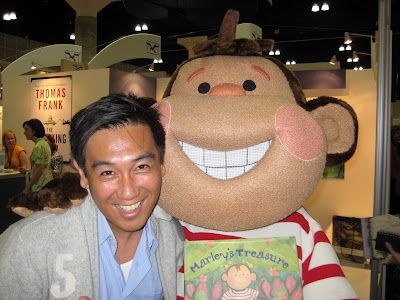 People in suits promoting stuff like this book Marley's Treasure. 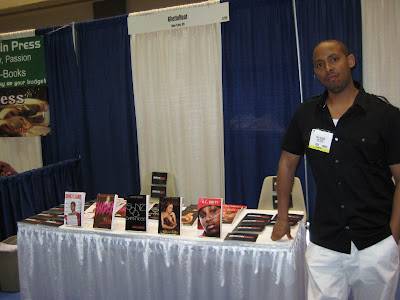 There was a small lane called "Writers Row." These were people who had the gumption to pitch their own line of books, like this guy with Ghetto Heat Publishing 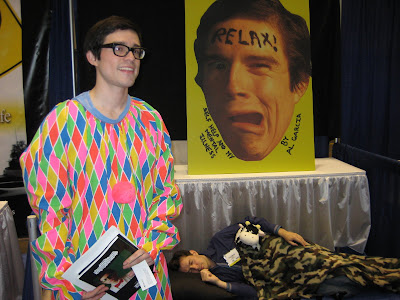 Or this guy stood pushing his book and his buddy sleeping there. 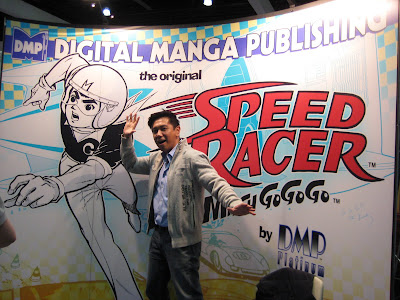