“When you’re writing, you’re trying to find out something which you don’t know.”

James Baldwin
Posted by the last noel at 11:16 PM 3 comments: 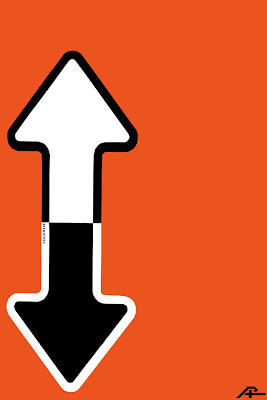 After writing a hundred pages of my third novel, I fear that I'd been going the wrong way. This story is about a boy with a rare blood disorder. Thus far, I'd been developing his world, plotting his life. This process has not been easy going. I'd been feeling like I'd been forcing, forcing, FORCING.

Lately, another boy has been haunting my thoughts. I began to hyperventilate discovering that this novel may not be about one boy, but two.

I feel the need to start over.
Posted by the last noel at 1:57 PM 6 comments: 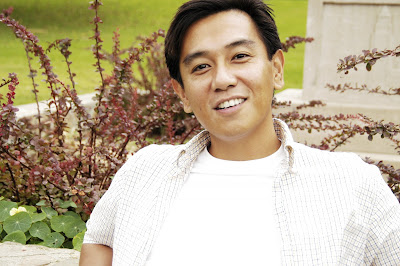 Do you see that smile on my face? Maybe because I found out that "Talking to the Moon" made the LA Times Bestseller List (Sunday, March 18, 2007 issue). It's number four in paperback fiction. It feels good.
Posted by the last noel at 4:50 PM 11 comments: 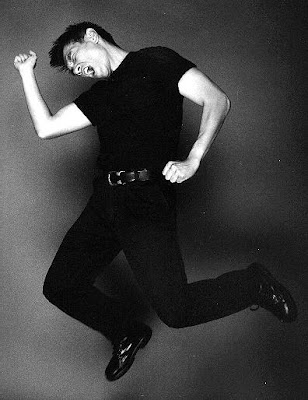 Not too long ago, I went to the relaunching of Buddha Lounge in West Hollywood. It was the first Weho nightspot that catered primarily to gay Asian men and their friends. It was quite a big deal considering that most clubs in the area were targeted toward (though not said overtly) a gay white crowd. I went to the opening of Buddha Lounge back in the nineties. Buddha Lounge and other clubs like it inspired my first successful literary venture: the writing of my first solo show, The Rice Room: Scenes from a Bar. (Postcard of the show above, taken by Shane Sato.)
The show was about exploring the lives of gay Asian men through the guise of a bar. Writing that show, which was all of 30 pages, gave me the confidence to try longer work, say a novel with 300 pages.
So, going to the relaunching of Buddha Lounge, an event that will happen on the first Saturday of each month at Ultra Suede in Weho, brought me back to a much more youthful time in my life when I wondered if I had what it took to be a writer.
I ran into some people that I hadn't seen in years. We're older and wider now. But that night, we laughed and hugged and pretended that turning 30 wouldn't happen for another 100 years.
Posted by the last noel at 6:16 PM 4 comments:

I have to admit that I was nervous about my readings. I was fortunate enough to get signings at three of LA's most literariest book stores: Skylight, Vroman's, and Book Soup. I knew I could get a good crowd at Skylight--I'd been hosting events there for 7 years. I was worried about the other two. I wanted to have a good showing. The last thing I wanted was to get there and have two people at the reading--which happens more times than people know. There's egg on my face and the bookstore ends up shrugging their shoulders, losing money on the event. I mean, they do pay for having the books sent and to have a staff person set up the reading and deal with the author.

I know that Vroman's and Book Soup were taking a chance on a relatively new author still buildling a readership. I did every marketing trick I could muster. I e-mailed, sent out invitations, made announcements on list-serves. I personally talked to dozens of people making them commit to one of the three signings.

Fortunately, press worked out where interviews were published that also announced the readings. The LA Weekly "Pick" also put me on the radar.

All of it led to three packed readings! I was pleased. The book stores were pleased. Whew! 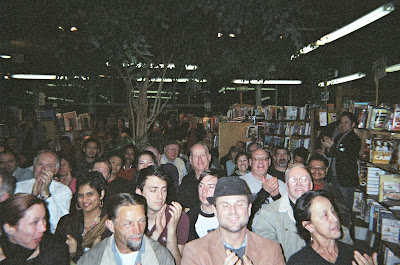 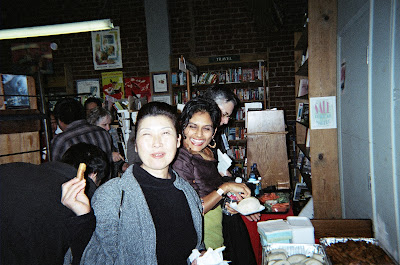 Crowd at Vroman's in Pasadena. 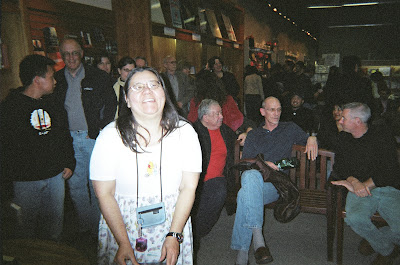 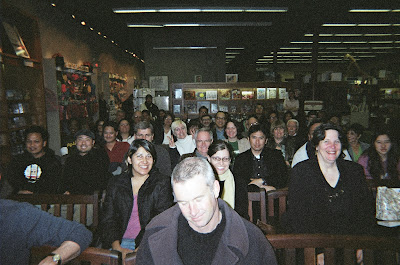 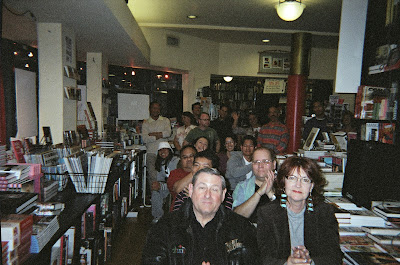 There's nothing more satisfying than seeing your book prominently displayed in a window. In this case, Book Soup did a great job! 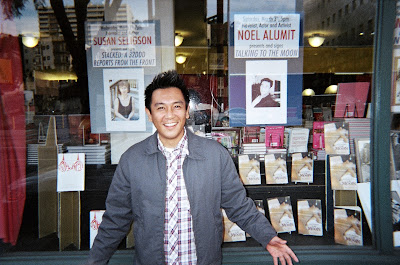 Posted by the last noel at 5:38 PM No comments: 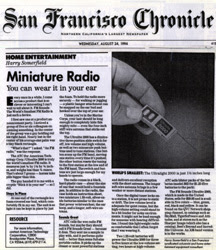 The San Francisco Chronicle reviewed "Talking to the Moon." It was terrific. It made quite some mention of the marketing of my book: it's unfortunate that it's been labeled "gay fiction."

Read up (it's the second article, so scroll down): 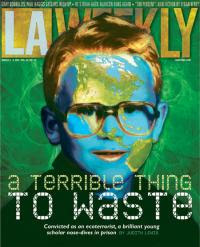 Whoa! I'm flattered that I was named "LA Weekly Pick," considering that there are some pretty awesome writers in town talking up their books.

Some writers that are making a splace in town include: Aimee Liu, Tara Ison, Daniel Alarcon, and Charles Phoenix.