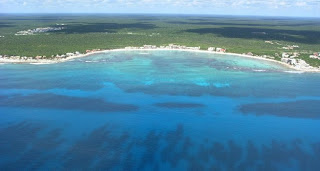 Most of my writing life is kind of dull. I'm by myself, filled with dread and awe. I wonder what will happen with my creativity, if something will come out of a writing session I commit to. Some writers call it drudgery. And, sometimes, it is.


Every once and awhile, I'll get to do something cool though. Like get a writing fellowship. Which I did! I'm heading off to spend ten days in Akumal, Mexico with a bunch of other writers. All of this with the generosity of RADAR Productions.

I have definate goals for this trip. I'm bringing a ton of research material, an old draft of my third novel, a newer draft which needs some revising. I intend to rewrite 25 old pages and write 25 new pages. Of course, I'll still be on a beach in Mexico--I hope I can focus.

I did a reading of Aurelio Locsin's play "Family Affair." It was really fun studying a character again and doing ensemble work on stage. I never thought going to "rehearsal" would be such joy again.

In the audience was someone who was more familiar with my literary life. He'd seen me host at Skylight, and he told me that he knew I did other things...but not acting! I told him that theatre was my first love. It's still a love.

However, I started to write because my first love was always hard to come by. She was like the popular girl you wanted to spend time with in high school, but she would only give you the time of day at her whim.

I probably wouldn't have written if the acting game wasn't so hard. Now, that I've written and consider myself a writer, could I return to my first love? And not feel slighted if she chooses not to spend time with me? Would I find joy just in the pursuit of her?

East West Players is having their Summer 2011 David Henry Hwang New Works Festival. And I'll be a part of it. No, no, not as a writer, but as one of the actors. Yes!

Playwright Aurelio Locsin is having a reading of his new play and I'll be reading one of the characters. Director Dom Magwili asked me to play the role of LD, a rather plain accountant who is ending a relationship. We had our first rehearsal last Sunday...it was good to go to "rehearsal" again.

Here are the details:

Filipino-American LD and Anglo Kenny decide to break up their long-term gay relationship. LD’s family, who like Ken better than LD, are thrown into turmoil. Do they try to get them together or push for the separation?...

ADMISSION IS FREE but parking costs, unless you can find free street parking.

(This is a staged reading, so no costumes, props or lights. Just some great acting and directing.)

Posted by the last noel at 7:03 AM No comments: